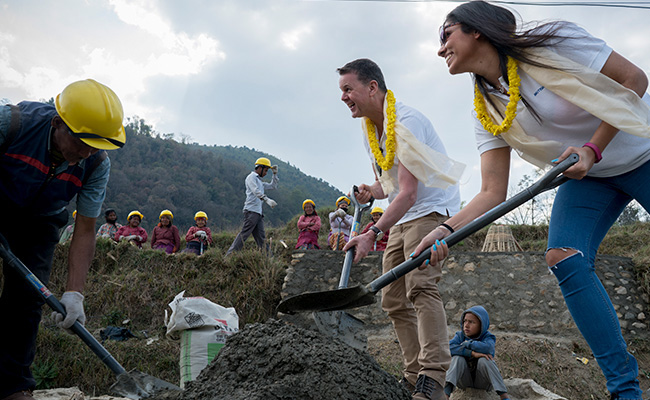 After a disaster it’s easy to focus on the houses that need rebuilding and the schools in disrepair but as BA’s cabin crew member, Aneesha Jandu, discovered on her recent visit to Nepal, the intangible reconstruction of people’s lives can be just as crucial to a country’s recovery.

When Aneesha made the treacherous journey up in to Nepal’s mountains, she was expecting to face devastation and the loss that a huge earthquake brings to a poor developing country and of course, the impact of the disaster was still visible one year on – rubble, dust, homes destroyed.

But even more powerful than the physical destruction, she reflects a few months after her trip, was the invisible but tangible joy of those she met.

“Children I met were so happy and I was so aware that their parents had worked so hard to pick themselves back up, look after their children and get them to school,” she said.

“It was so impressive to meet a group of women in yellow hard hats digging away to build a road as part of a cash for work project. There was real equality in their efforts and they were being empowered to take hold of their own future.”

Aneesha was part of the team that helped raise the £328,000 in onboard donations for the DEC Nepal earthquake appeal. She joined three BA colleagues, a BA customer and two members of DEC’s 15-person team on a follow-up visit one year on from the DEC’s Nepal Earthquake Appeal.

“It was amazing to see the money we raised being spent,” she said. “A simple act of asking for a donation has really helped to do so much amazing work. We really saw how much had been done in a year and how much more needs to be done. It’s really important to see where the money is going and that it’s being used so meaningfully.”

Aneesha met women restarting their tailoring businesses and reopening a shop that had been destroyed in the quake, thanks to a small grant from a DEC member.

“The money goes so much further when you help people get back on their feet,” she said. “Much further than just giving them something. People we met were so happy and proud of what they had achieved.”

When the team visited a remote village where every one of the 150 homes had been destroyed, it was a harsh insight into the scale of work that still needed to be done.

“There was still a lot of rubble and dust everywhere and people were living amongst destruction,” Aneesha said. “It was so high up and remote that it looked like the earthquake had only just happened. But a clean water system had been installed, which was having a huge impact on the health and wellbeing of the village.”

It is the wellbeing of those she met that has stayed with Aneesha and continues to inspire her months after her trip.

“I clearly remember a woman I met who had such a gratitude for life,” she said. “When we asked if we could take her photo, she replied, that she is here today because the quake struck during the day when everyone was at work or at school. If it had hit at night, things would be different. That outlook hit me in the heart in a very powerful way.”

Read more about the BA team’s visit to Nepal here.