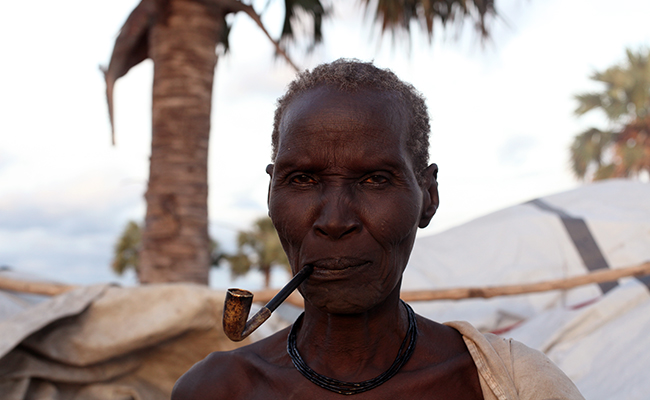 Nyakuong Madol "If we die, we die together.”

Nyakuong Madol lives on Payat island, Unity State, South Sudan, only reachable by a four-hour canoe ride or eight hours of treacherous wading through the vast swamps, home to crocodiles and snakes.

Many fled to the island for safety when fighting reached their homes on the mainland last year. Madol travelled for three months to reach Payat – everyone in her group survived the long and difficult journey but in the chaos of displacement some families lost children in the swamp.

“We come from Leer but my son was in Juba and was killed in the fighting at the beginning of the war. We had cattle in the Leer but they were taken when the soldiers came,” she said.

More than 2.4 million people have been displaced since fighting between government and opposition forces broke out in December 2013 – many arrive in camps or communities with very little to earn a living.

Despite having left almost everything behind at home, Madol hopes for modest items to help improve daily life: “I would like a new bucket and cooking pot,” she said.

Without tools or farmland, Madol and her family are reliant on food aid or when that runs out they eat wild foods such as water lily roots for survival.

“I collect the water lilies.  We are registered for the WFP food ration and we share the food with other people here. When we divide the food with the community it last seven days.

We help them because the children in my neighbour’s house cannot die while I have food.  They cannot die alone.  If we die, we die together,” she said.

Oxfam has installed a well, providing clean water to families, installed toilets and is running a public health campaign, in order to prevent disease – all the more important given the lack of healthcare on the island.

“If someone gets sick we take them to the clinic in Nyal. We go on foot and if we have to we carry the sick person in a blanket.  Some people die on the way,” Madol said.