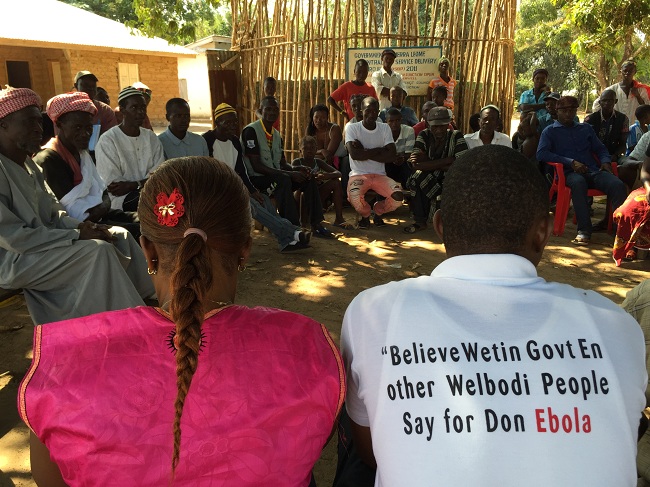 Health education meeting in Sierra Leone run by CARE International. The t-shirt says: "Believe what the government and health authorities tell you about how to stop Ebola".

By September the crisis was accelerating and 2,100 people had died from the disease. The clear strategy from governments and many within the humanitarian community was to invest heavily in treatment. The medical emergency response, of course, saved countless lives and much more should have been done by the whole humanitarian community in the initial months.

Médecins Sans Frontières was at the forefront of the lifesaving work from the very beginning and was urging the international community to do much more.

However when the DEC launched its first-ever appeal for a disease in October, it concentrated primarily, not on medical treatment but, the prevention and containment of Ebola. We knew this was where most of our members had the greatest expertise, based on years of experience working with grassroots organisations and local people across the region.

We knew there was an army of courageous and tireless people ready to support the vital, but sometimes elusive job, of raising awareness and sharing information.  Six months on and volunteers continue to go home to home, from school to village hall to educate people about how to treat and contain the unprecedented outbreak of this deadly disease.

The DEC’s members are concentrating the £37m raised from its Ebola crisis appeal on helping communities to prevent and contain the disease. Our members have trained more than 4,000 community health workers, social mobilisers and faith leaders, who have in turn provided lifesaving information to more than 840,000 people across Sierra Leone and Liberia.

At the beginning of this year, WHO called mass education and community mobilisation ‘the linchpin’ in the fight against Ebola. Just as the importance of awareness and social change was recognised too late in the crisis, it is now widely accepted as the key to reducing the number of cases in Guinea and Sierra Leone to zero.

It’s hard to count the number of people who benefit from information or measure the impact of raising awareness but working with people and helping them to protect themselves has proven crucial in the reduction of cases.

Tracing people who may be infected, early reporting of symptoms, following protection advice, and making sure people are buried safely, are all dependent on community action. Aid agencies have long been moving towards empowering local people instead of only providing goods and services, and this crisis has shown – yet again – that training, equipping and supporting local people is the key to success.

The WHO and DEC members both agree that a powerful network of trained volunteers and tracers are a huge resource that must be empowered to play an even greater role in the future. Some people are of course still too afraid to get tested, or continue to hide sick people or dead bodies. Without radio programmes, posters, informed community leaders, progress may yet be reversed.

Care International has pointed out that women have been disproportionately affected by Ebola, partly because they tend to take on the caring role. Women may have increased exposure to the disease but they are also the best resource for containing it, they say. They must therefore be meaningfully engaged in community and national responses.

The WHO in its report Ebola response: what needs to happen in 2015 says: “The persistence of infections throughout 2014 had two causes. The first was a lethal, tenacious and unforgiving virus. The second was the fear and misunderstanding that fuelled high-risk behaviours. As long as these high-risk behaviours continue, the virus will have an endless source of opportunities to exploit, blunting the power of control measures and deepening its grip.”

The number of people in quarantine has fallen below predicted levels but DEC members continue to support those cut off from their community. Members are supplying essential items, including mobile phones, to help people keep in touch with local organisations and their loved ones. These new strategies are helping to encourage people to remain isolated when necessary, but also keeping them connected to essential information and support.

DEC funds have also trained 200 people on safe burial practices and 32,000 people have received orientation on the importance of safe burials. Our members have worked with faith leaders and local authorities to create dignified burials, where families are able to attend.

A recent Oxfam report Ebola is still here found that many people spoke positively about the community initiatives at the centre of the Ebola fight.

“Many spoke of the greater awareness of emergency phone numbers, the benefits of early referral and the vital need to maintain high rates of hand washing and other hygiene practices. People also talked positively about new hygiene materials such as soap, and the Ebola treatment units.”

Alice Stevens, a government hospital matron in Sierra Leone clearly reaffirms the importance of knowledge. She told Oxfam: “Ebola is not a normal disease. This kind of thing has never happened before. Doctors were dying, nurses were dying, cleaners were dying. People didn’t know what to do in the beginning, until we were trained. Training upon training has helped us to adapt. But in the future all medical practitioners should be trained in Ebola.”

The latest figures show the decline in confirmed cases of Ebola has halted over the last three weeks. To accelerate the decline towards zero cases will require stronger community engagement, improved contact tracing and earlier case identification. In the week to 19 April, 33 confirmed cases were reported, compared with 37 and 30 in the preceding weeks.

DEC members are still responding with urgency and raising awareness to help secure and strengthen the great gains made by thousands of new community health workers.