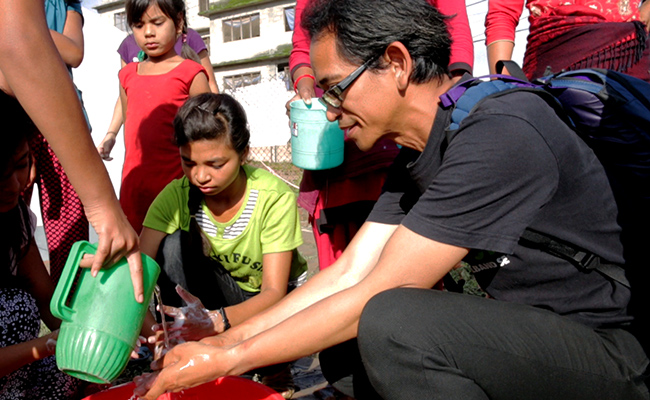 DEC fundraiser Julius Billones shares his experience of visiting Nepal. This is his story, in his own words.

Sitting and talking with perhaps 20 women in a remote mountainous village in Nepal taught me so much. Babies were crying, feeding, crawling over legs, while the women were listening to a local nutrition expert as she gave cooking and hygiene advice, as well as farming guidance.

They had walked considerable distances, leaving their new makeshift shelters made from debris and emergency shelter supplies. Most of their lives have been turned upside down, many have lost everything they owned and yet they invest their time in education – and always with a big smile.

I had travelled a long way to meet them too. I’ve just run a grueling 100 kilometres to raise money for the DEC Nepal Crisis Appeal. I have lived in the UK most of my life but last year I returned to my home country of the Philippines to help the recovery effort following Typhoon Haiyan. When I saw villages that had been destroyed and homes flattened again in Nepal, I knew I had to do something to help.

During a training run in a local London park last month, members of the British Nepalese community surprised me with a big thank you message and I found out I was to visit Nepal with the DEC.

Like so many others in the UK I did something to help. I trained and managed to complete the 100km - it was wet, rainy and cold but I didn't want to let down the Nepalese people. Every kilometre of training and competing was tough and painful but nothing compared to the journeys being made daily in quake-hit Nepal.

The women’s welcoming smiles and their desire to learn as much as possible was very real but I also felt a tangible sadness. The women were holding their babies tightly, tears in their eyes in fear of the future. They are doing their best to get over the earthquake and find ways of coping.

I spoke to a mother of three-year-old twins. She had lost her house and was living in a temporary shelter she’d built on the top of her old home. She explained how difficult it is with the twins at such a crucial stage of development. Being at the nutrition centre run by Save the Children not only helped practically but her children could also play with other children their own age. She could spend time with women she could relate to.

I visited Nepal with the DEC to see how the £83 million raised in the UK is being spent by the 13 aid agencies.  I saw the behind the scenes impact that doesn’t make the news. For example the nutrition education was run by a local elderly woman who had grown up in the community. She was energetic and had the attention of the group of women for hours. She was using simple pictures on A3 card, not to introduce something radically new, but just help them improve the way they feed their children.

The earthquake three months ago means the amount of food available is limited so DEC funds are being used to provide food and help people understand the best way to cook what is locally available.

On the two-hour drive up the mountain to visit the women, we passed so many damaged and destroyed houses. It was difficult to distinguish piles of rubble from previous homes. Houses had collapsed creating huge cracks in neighbouring houses. All had to be destroyed. Four or five story buildings lay on their sides. People had constructed tents and makeshift shelters on top of gravel where their house once stood.

I also saw how DEC members are providing emergency materials to help people build a temporary shelter to get them through the monsoon season. I met a couple in their new shelter made of left-over wood from their destroyed home and corrugated iron sheeting. I asked where they used to live and she said, we are standing on it now. This is our home. She was so proud of their new construction. It made me realise it doesn’t matter what a house looks like, it’s what you do with it. She and her family had been living in a tent since the quake but now they had a place they could call their own.

There is so much to do to help  rebuild  strong safe permanent homes but it is something else to stand with people who have just lost everything and look at the mountains around them and to agree it is beautiful.

Growing up in the countryside in the Philippines – one of the most disaster-prone countries in the world – I knew what it was like to have your home collapse under the weight of a storm or to get injured in the chaos of a monsoon. Our roof was made of plastic left over from a nearby warehouse. It dripped on us when it rained.

It’s easy to forget all this living in the UK and going to work every day, head stuck in to social media, the kids on their computers. My time in Nepal has been a wake up call – it’s made me realise I don’t smile at strangers anymore,, don’t see my friends and family enough. It’s my own fault for not  making the same effort the women make to go to the nutrition centre. They knew that talking and listening to each other makes their lives so much richer.

Rebuilding homes, infrastructure and strong resilient communities will take a long time. Aid workers I met are making plans for five, six, seven years ahead. I hadn’t realised how the whole humanitarian effort is planned step by step. Like most I had assumed organisations go in, distribute stuff and leave again. But they have teams of very experienced people who have worked in the Philippines and elsewhere working with local people to distribute and communicate everything.

Local people are often the main drivers and the UK agency is just there to guide and check everything is working. They don’t take over the community but work with it. The coordination is very impressive, with regular meeting to organise who is doing what. In one area, Oxfam may be providing water, CARE may be proving tents, food by Christian Aid. It’s organised meticulously.

It was such a privilege to represent all the thousands of people who have fundraised and donated to the crisis. They can be proud that their money is being spent well and in the right places. They can also be assured that although recovery will take years, families are already making huge strides to rebuild their lives – improving the food they give their children and building shelters to get them through these initial tough months.

All we can do it continue to support and give and listen to them. And learn from them.