Reaching those in need during the worst of times in Yemen

In February, Saleh Saeed, chief executive of the DEC, visited war-torn Yemen, a country where two thirds of the population are now in need of humanitarian assistance 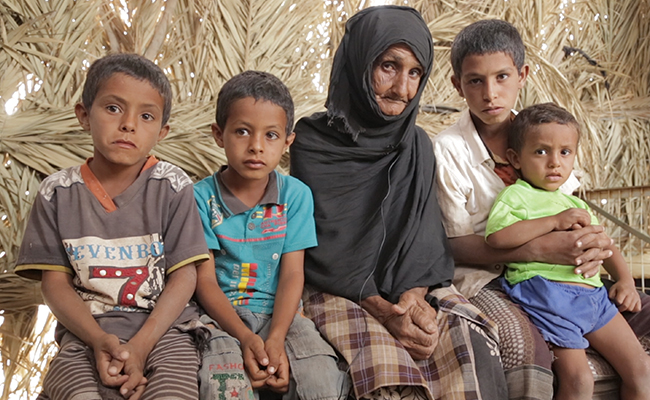 Grandmother Aliya with her four grandchildren.

Note: Our appeal is now closed. You can still donate to this crisis via our member charties listed here, and find out how our appeal funds were spent in our final report.

“In all my life, I’ve never known it to be so bad.” These are the words of Fatima, an elderly woman from Lahj in the south of Yemen. She wasn’t able to recall her age, but, in a way, that was irrelevant. Fatima had already seen so much and been through so much hardship, working and living in the poorest country in the Middle East.

I met Fatima in February in Makhzan, a little shanty town where DEC member, CARE International, was distributing food packs consisting of oil, lentils and half a sack of wheat. The UN now says that Yemen is one step away from famine with 17 million people food insecure. The numbers in need are mind-boggling. Fatima’s words “I’ve never known it so bad” also ring true for me, having visited Yemen, my ancestral home, over the years; I still have close family and friends there.

I wanted to see for myself first-hand the situation on the ground for the millions of people the DEC’s member charities are trying to help with lifesaving aid, including food, cash, healthcare, water and sanitation. Travelling across the country was challenging and I had to pass through more than 50 checkpoints on my journey from Sana’a to Aden.  I could hear bombs exploding and see how people fear for their lives every day.

My first stop was Hodeida, one of the areas worst affected by extreme hunger, where I was shocked to see the overcrowded hospitals and health clinics. It is currently reported that 3.3 million children and pregnant or lactating mothers are acutely malnourished and almost half a million children under five are suffering from severe acute malnutrition. I was heartbroken to see the distress and suffering of so many babies and children in the Hodeida General Hospital.

But, there is hope. In another clinic in Hodeida, funded by Islamic Relief, I watched children like one-year-old Omar receive ‘the middle arm test’, a revolutionary way to quickly and easily diagnose malnutrition. Omar was then prescribed 10 packets of ‘Plumpy’Nut’ – a tasty and life-saving peanut-based paste which only costs 25p per sachet and can easily be given to children by their parents.

Three million people – more than 10% of the population - have now been displaced by the conflict in Yemen, leaving them with no home, food or opportunities for work. As we headed to Aden, we had one more stop in the desert in a place that had no name but made the most lasting impression on me.

Here we met Aliya, living with her four grandchildren and her daughter-in-law who was out collecting firewood. Aliya’s son, the family’s main breadwinner, died a few months back and now they fend for themselves. “We live off our livestock, we care for them, they care for us, that’s all we have. Since the war we have had to move around from place to place for safety and in search of food for us and the livestock. If our livestock die, then we die."

Aliya showed me their ‘bedroom’ – three single beds stitched together. That was it – the open sky for the roof and the open desert for walls and some plastic sheeting to keep the sand out. Aliya has received some help in the form of food packs but, as is custom here, she has shared it with others in need who weren’t so fortunate.

The DEC Yemen Crisis Appeal, launched on 13 December 2016, has now raised £27 million thanks to the generous support of the British public, many corporate supporters and the UK Government through its Aid Match scheme. Fatima and the many people I met were appreciative of the money so generously given by the British public; especially as Yemen is little known and the humanitarian crisis has been overshadowed by the politics of the region. 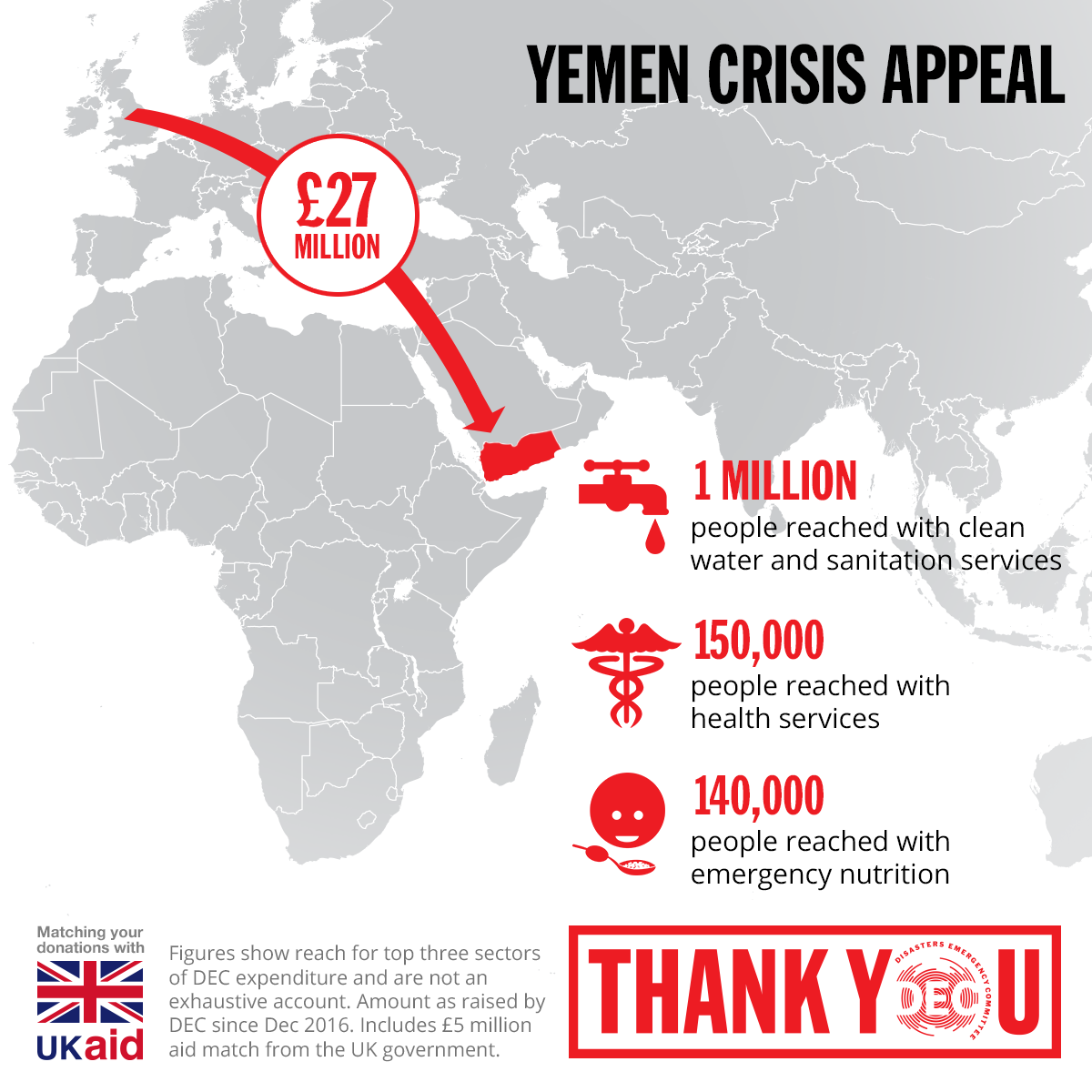 The conflict in Yemen has had a devastating impact on the population from all parts of the country and on all sides, but it’s the innocent families and children who are suffering the most. DEC funds are helping thousands of children like Omar and families like Aliya’s in the hope we can prevent their children succumbing to severe malnutrition and to avert the ultimate horror of famine.

It’s never been so bad for millions of people in Yemen, but it’s not too late. DEC member charities and others are reaching out to help the most vulnerable. The funds that people have given are already saving lives and making a huge difference. We hope that, with more support, we can reach even more people.