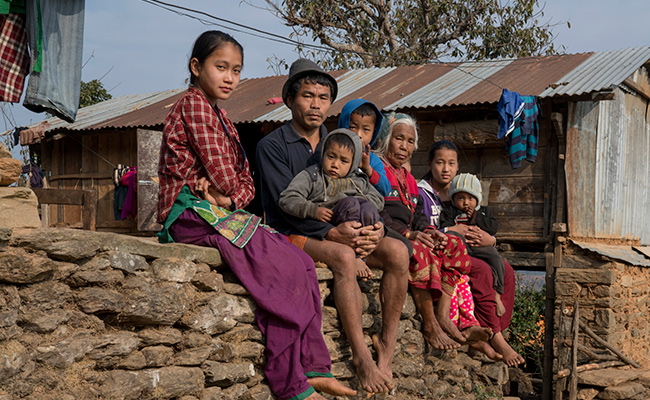 One year on from the Nepal quake, the Disasters Emergency Committee’s (DEC’s) Nazia Hassan visited Nepal and learned how a new network of carpenters are rebuilding their communities one local stone at a time.

The dust of the new road climbing up the mountain from Nim’s village in Ashrang village, Gorkha, to the health centre and food markets had hardly settled when I visited Nepal in February. After trekking up the mountain on a newly-paved foot trail, I met the man who had helped to build it.

Nim Bahadur Rana (pictured above with his family), 38, lives with his parents, wife, and two children in one of the worst quake-affected areas of Nepal. A farmer and community man, Nim’s polite and unassuming manner cannot disguise his strong and determined ambition for his own community.

Talking outside Nim’s family home on woven bamboo mats, the impact of last April’s earthquake was stark. His house, which used to be three stories high, was now just one after collapsing in the disaster. Nim said he is still saving to buy the materials he needs to repair his home – and his work on the trail is helping the family with much-needed income. Nim is paid the equivalent of a month’s grocery shop by one of the DEC’s members for 12 days work.

Before Nim carried and smashed rocks to make the foot trail, there was only a narrow winding mountain path, taking three hours to reach the health centre. But after each family in the village laid a section of path, it now only takes an hour to reach food and medicine. He’s already planning the next road he’d like to build with his neighbours – this time to the water point down the mountain.

Like almost everyone I met almost one year on from the Nepal quake, they were getting on with life and they were doing it with an energy that defied the tough mountain terrain and the pitiless snow and rain.

At 11.56am on the 25th April 2015, Nepal experienced one of the biggest earthquakes the country has ever known. With a magnitude of 7.8, the quake was phenomenal, as was the devastation it caused to the lives of those living in Nepal. Then just as people were starting to understand the situation they were in, two weeks later, a second earthquake hit, measuring 7.3, causing further destruction to an already fragile country. 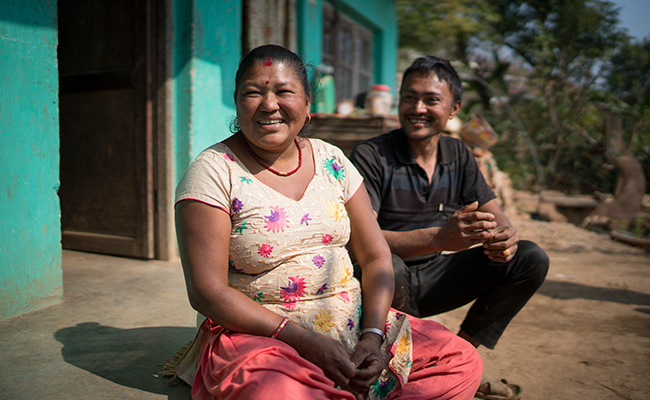 For 40-year-old Shanta Shrestha (pictured above with her husband) from Machgam Village the past year has been life changing. The Nepal earthquake destroyed many homes in her village, damaged farms and cut off the water supply. But just months after the disaster, Shanta attended a short carpentry course funded by the DEC and one year on, she has a thriving new business.

I met Shantha in the workshop she has opened with her husband – a small business, where the power couple insist on providing affordable reconstruction work to their neighbours, making it accessible to the poorest in their village.

When close to 900,000 homes were destroyed or damaged by the earthquake one year ago, we knew we had to help provide emergency shelter as soon as possible. Winter’s zero temperatures and the monsoon rains were only months away, and we know from previous disasters that a good quality temporary home helps speed up a family’s recovery.

But after almost every disaster, delivering and constructing shelter is by far the most challenging task we face. The DEC brings together some of the best shelter experts in the NGO sector and yet rebuilding homes is riddled with complications around land ownership, government planning, and safe and convenient relocation away from danger zones.

The Nepal quake created additional problems – transporting construction materials to remote villages cut off by landslides was sometimes only possible by helicopter, while a fuel crisis at the end of 2015 pushed up the prices of crucial construction materials, restricted travel of aid workers, and prevented distributions of relief goods.

On top of this, there weren’t enough construction experts to advise on building safe homes.

So DEC charities trained people in remote villages to use local materials, mostly available in the treacherous mountainous areas, to construct their own homes. The people they trained, trained others and some set up small businesses.

Just one year on so much has already been achieved by communities, designing and building their own homes. With help and guidance from DEC experts, a new network of carpenters is working across quake-affected villages and districts, helping others to recover from crisis. 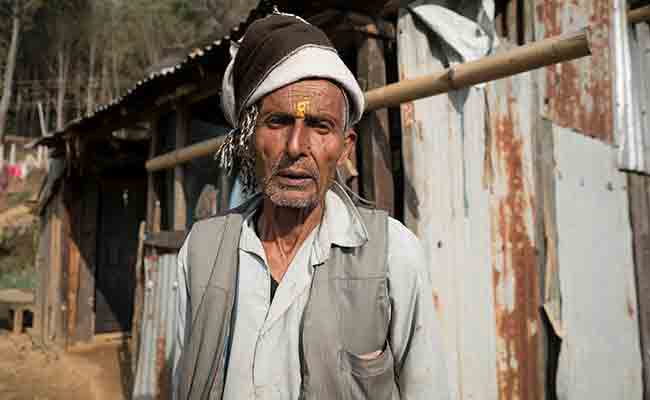 Eighty-year-old Khadanand Bhatta (pictured above) was living alone in his home when it was destroyed by the earthquake in April 2015. His friends and neighbours used all the skills they learnt from their training, using salvaged materials to reinforcing joints and provide Bhatta with a new safe shelter.

There is still a lot of tough work ahead and the approaching monsoon will be difficult for all those still living in emergency shelter, but we’ll all keep working together to slowly rebuild stone by stone. The DEC will continue to support people for another two years – and I’m sure they’ll continue to take our support and create thriving businesses or build new improved roads up the mountain.

See the key moments of the Nepal earthquake, the DEC appeal and the aid response in Aftershock.