A letter to Muna 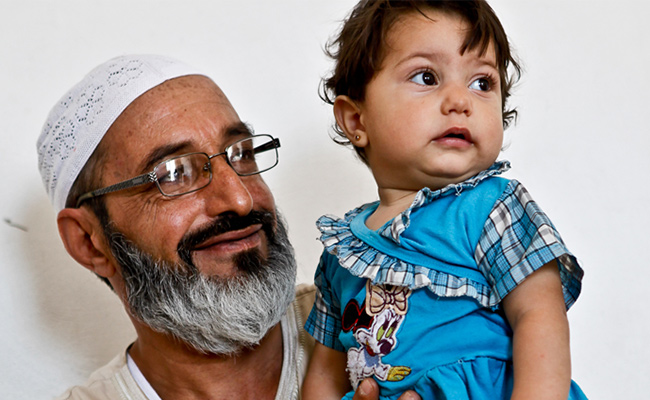 It’s been hard to stop thinking about you since we met the other day. Perhaps it’s because we share a birthday. You turned one this week. I turned 29.

When I was born, my mum knew I wasn’t going to wait. She gathered her things, rushed to the hospital, and shouted at nurses who told her I wasn’t quite ready to be born yet. In her words, I ‘flew out’, my father just having time to meet me before fainting and being carried away on a stretcher.

When you were born, your mum had the same instinct. She hurried to her midwife’s home. The hospital wasn’t an option, because there was a war, and she didn’t feel safe there. She gave birth to you, a healthy baby girl, on August 15. Your father didn’t faint, because he wasn’t there.

When I came home from hospital, I moved into a bedroom in our half-renovated home with my big sister and our pet corgi. You didn’t get to go home. Because when your mother was giving birth to you, your house was blown up.

It is my job to come into homes and talk to families like yours. I ask a lot of questions. People always give me answers. I feel that this is unfair, sometimes, because rarely do I have any answers for them.

I’m writing you this letter, which you’ll never see, because there are so many things that I want to explain to you - and to so many others here - but I can’t. So with cowardice, perhaps, I write about them when I get home.

I don’t know how to explain to you, for example, that your mother loves you, even though she often can’t stand to be around you because you remind her of the war in Syria. I know that she loves you because she’s put you in the care of your grandfather, and I’ve never witnessed such love as exists between the two of you. Your grandfather’s hard, wrinkled hands are so big around your small, chubby legs as he holds you to him. I see in you my own father and his grandson - my nephew - and despite the horrible circumstances that brought you together, I can’t help but smile.

I don’t know how to tell you that after your birth, your very survival was a miracle; that 100,000 other people died in your country, as your life was just beginning. That you could well have died, too.

As a humanitarian worker, you might expect me to make things better for you. So I don’t know how to tell you that the Syria peace talks have been delayed, again. That every day more people are dying, and more children are suffering, and that people in other countries are too busy to talk about it. Your family escaped a war. Your mother carried you for days amid rocket fire to reach the border of a foreign land, with no possessions, to keep you safe. Talking probably seems quite easy, by comparison, doesn’t it? But we adults can be a confusing lot.

After I left your home this week, I visited one of your neighbours. She is the same age as your mum. She told me that two of her brothers had been killed in the conflict. Her children are now frightened of planes and fireworks. Her son is obsessed with playing with guns.

She told me that surely the Syrian refugees must be on the television every day, and on the front page of every newspaper and at the forefront of everyone’s minds, all over the world. I didn’t have the heart to tell her that they’re not.

When I lived in Haiti after the January 2010 earthquake, I spent my days and nights responding to questions, coming from all around the globe, about what was happening and how people could help. Here, sometimes I wonder whether anybody even wants to know.

The hardest thing for me, though, is that I don’t know how to tell you that despite everything your family is enduring, the humanitarian community simply doesn’t have enough money to help you.

I see family after family just like yours, scraping by, kids falling further and further behind in school, dealing with things they’ve seen and experienced that keep them awake at night. The number of people affected by the fighting in your Syrian homeland – a place you don’t even know – is increasing by the day. But the dollars are not. Millions of people need help, quickly, and with everything: food, safety, water, healthcare, diapers, toilets, transport, education, protection. Long term, they’ll need infrastructure, paperwork, jobs, schools. Commitments have been pledged but they’re not enough. We’re not doing enough. We can’t.

inseparable.jpgI thought about you, Muna, on our birthday, two days after we met. I wondered how your family celebrated your first year of life, spent in a foreign land. I was in a foreign land, too; Australia seemed very far away.

I went to school with some Syrian children. I was given a bracelet, a fizzy drink, and a mouldy half-biscuit from someone’s pocket. I had received some bad news from home that day, and these gifts from children who’d been through too much, and yet who still wanted to make my day wonderful, meant more to me than I could ever have foreseen.

An elderly Syrian woman asked me yesterday to put out a call for help on her behalf. “I hope that the outside world could support us,” she said, “to understand the situation we’re in, and to send us some help.”

Daily I’m hearing stories, sharing concerns, handshakes and coffee with Syrians affected by this conflict. This places me in a privileged position to tell the world what I’m seeing here. But it’s not easy. Sometimes I’d just like to ask everyone, everywhere, to imagine for a moment the feeling that comes with sitting in the homes of mothers, who are listing their seemingly endless needs, and wondering what on earth you’re going to tell them.

My hope for you, little Muna, is that this crisis doesn’t take away your right to a childhood, as it already has so many others. This is not going to be easy, and will require work, humanity, and commitment from a lot of different people, in a lot of different places.

So this year, on August 15, I blew out my candles for both of us. And instead of making a promise I wasn’t sure I could keep, I made a wish.

You can see the original article with more of Meg's pictures of Muna on the World Vision website.