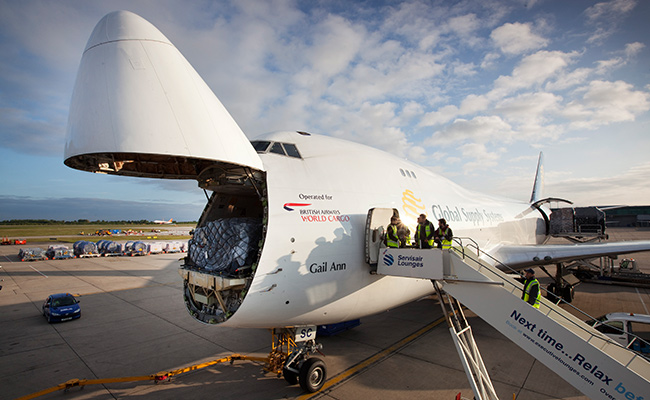 A British Airways (BA) Boeing 747 freighter with capacity for up to 110 tonnes of cargo flew from Stansted airport early on the morning of the 12th August to Ethiopia. The aircraft carried 5,000 meters of pipe from Oxfam, which will be used to supply much-needed water to the Dolo Ado refugee camp in Ethiopia.

The aid delivery took place during a BA in-flight fundraising drive that ran from the 1st to 14th August raising £136,175.62 in donations from passengers for the DEC East Africa Crisis Appeal.

Keith Williams, British Airways’ chief executive, said: “The worst drought in 50 years means the lives of millions of people hang in the balance. It is vital that we get aid from charities like Oxfam and UNICEF to the most seriously affected areas across East Africa. We want to do what we can to help those caught up in this terrible crisis.”

Oxfam is among those working in the region and aims to reach some 3 million people across Kenya, Ethiopia and Somalia.

Jane Cocking, Oxfam’s humanitarian director, who was at the airport when the flight departed, said: “It was a moving sight to see the aircraft being loaded with Oxfam’s supplies today. It is thanks to the huge support we have received from the British public and organisations such as British Airways that we can get this vital equipment to where it is needed.”

The piping that Oxfam flew out on the BA flight will be used to channel clean water over 5km into the Dolo Ado refugee camp in Ethiopia where at the time of the flight close to 2000 people were arriving every day.