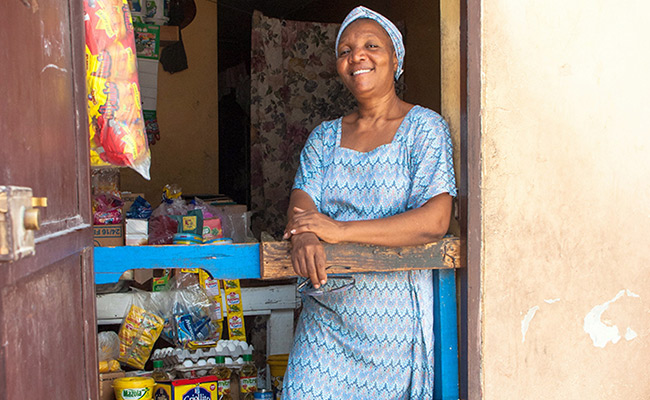 Yvette Lapaix and her neighbors in Port-au-Prince’s Carrefour district have built a great deal since the earthquake five years ago. What she’s most proud of isn’t bricks and mortar. It’s unity.

“When people come together who didn’t know each other before, and work together for a common goal, they learn to trust each other. They form a community,” she says. For people displaced by the quake, that community is the first step toward a new home.

Through CARE’s Village Savings and Loan Association (VSLA) programme, Yvette joined with other quake survivors, mostly women, to improve their lives financially. Members form self-managed groups that pool their savings, make loans to each other, and reinvest the proceeds in their businesses – like Yvette’s neighborhood grocery store.

Over the past three years Yvette has saved faithfully, and borrowed and repaid about 50,000 Gourdes ($1,100) from the group. She’s made a profit of between 30 and 40 percent, plowing it back into the grocery. Others are using their profits to repair damaged homes, send children to school, and buy food or other necessities.

The VSLA approach, which CARE innovated in sub-Saharan Africa and has successfully replicated in many countries, is a powerful self-help mechanism – and a key part of CARE’s recovery strategy in earthquake-affected neighborhoods like Carrefour.

Around 200 of the VSLA groups are in Carrefour, where village agents help spread the practice. CARE chose Yvette as a village agent because of her talent for educating neighbors about the programme. By sharing the story of her own success, she’s helped form four more groups, and watched formerly frightened, isolated people become a community.

“There were lots of people in the group who lost their houses in the quake, who even lost children. I lost my 21-year-old niece. But the group has helped us get back to life and find support.”

They come initially for the chance to improve their income, she says. But once the new members start pooling their savings – putting their weekly contributions in a cash box and entrusting a fellow member to keep it safe at home – they form bonds of trust that go beyond the financial.

“CARE has helped people who didn’t know each other come together and learn to rely on each other,” she says. “Sometimes Haitians tend to wait for others to come and give them things. But with this group we’ve learned that there’s something we are able to do on our own. I’d like to see the VSLAs spread to the entire country.”