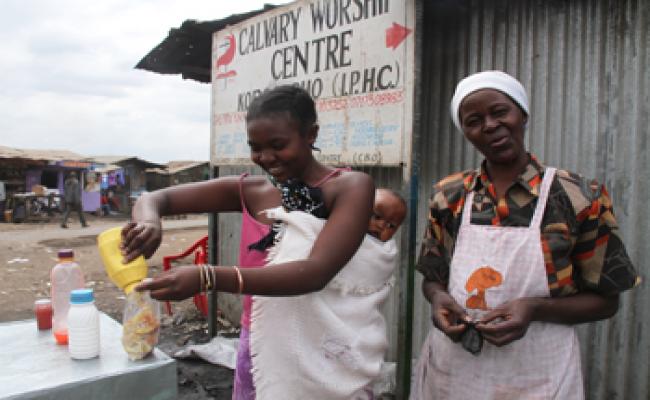 Winnie Wanjiku Chege is 49 and lives in Korogocho Slum, Nairobi, Kenya. Winnie lives with seven people in her home – her mother, her brother, her four children (aged 23, 18, 17, 15), and her two grandchildren. Food prices are very high in the area due to the ongoing drought in the region.

“I used to do a dangerous job working in the Mukuru dumpsite. It’s really dangerous for people because all the waste from Nairobi goes there, including medical waste. Most people don’t have good health and the smoke from the burning waste gives people chest infections. I didn’t make enough money and I really wanted to get out of that type of work because of my health. I used to cough a lot and have problems with my chest. The money I earned was not enough to even do basic things, my children couldn’t go to school and I never had enough money to feed them. People who exploit us are the workers who run the dump. I used to collect plastic bottles, metals, and plastic bags, charcoal and bones.

The middlemen buy the things we collect and sell them on to companies who recycle them. I made between 80 and 100KS (€0.68/0.85) per day. And I used it very fast. It’s difficult to get out of that kind of work so I needed to go back every day. My first priority is to pay for the house so my children have somewhere to live. I often didn’t have enough money left over for food so I would eat the food I found at the dumpsite.

The food I found in the dump site was often left over food from hotels or big estates. Some people became aware that we would eat the food and started packing the leftovers well in plastic, e.g. chapattis, and they wouldn’t dump the food with chemicals so it was more hygienic for us to eat that food. Before this happened the food was never wrapped and we could always be sick from eating it. My friends were afraid to visit me because they didn’t know if I had gotten the food I was serving them from the dump site, and they also didn’t want to be associated with a person like me, a ‘chokora’ (garbage collector). I was an embarrassment to them.

My children came to the dump site to help me but often got very ill. One of my children had diarrhoea. We went to hospital but I could not afford to pay for her treatment. She never recovered and died a few days later. I’ve been afraid for my children’s health and safety. I used to live by the river and it was isolated and not safe. No one would visit me, but it was the only house I could afford. One day I left my daughter in the house as I went out to do errands and a man tried to abduct her but luckily my neighbour stopped it from happening. I had no door on my house so it was easy for strangers to come inside.

I heard about Concern through the village elders. I received eight cash transfers* of 1,500KS, one a month for eight months, and I also received a business grant. I have been able to move to a safer place and now I feel human, like the other people around me, I have been able to send one child to school and I have stopped working at the dump. I have since set up two businesses with the money; one is a small chip stall. I buy the potatoes at the local market and I make small packets of chips for people and sell them. The other business is that local people bring me their empty bottles and I sell these onto larger companies and make some money. I now go to the market and buy food like everyone else. I feel better about life, if I have a problem now I can use my own money to solve it, I feel human, just like everyone else and my mind has relaxed from the constant pressures. I used to worry every day and was always very upset.

Concern has helped build my self esteem and has opened my eyes. I am wiser and successful in my businesses and I now have friends and can get advice and support from them, which I never had before. The health of my family is great and I can now afford to go to the hospital and get medicine if I need to.

I have now a successful business and although it is still small I have hope that it will grow into a bigger business. It is my dream to open a small hotel and employ other poor people from the dump site who don’t have jobs at the moment. I have learnt a lot and am ready for a further challenge.

*How the Cash Transfers Work: