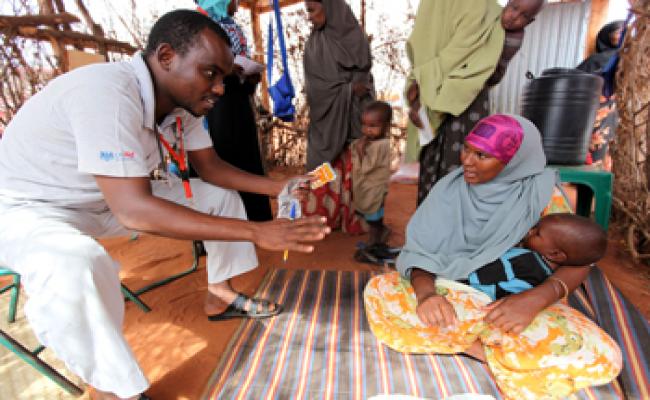 Hussein Ali Adan (pictured) is 27 years old and is from Wajir.  He started working as a Community Therapeutic Centre nurse for Save the Children in January 2011.  He travels around the district, screening and treating malnourished children and pregnant and lactating women at outreach centres. He was recently interviewed by DEC member Save the Children.

“I have been working for Save the Children for 7 months.  I finished my nursing course in august in Embu, here in Kenya.

“Each day is different and each outreach centre is different.  We can see up to 300 people in a day, especially at the centres that are further out of town because they serve a really big area and people come in from the bush looking for help. We can admit up to 15-20 new people onto the programme in a day.

“The severely malnourished children get high energy peanut paste and the moderately malnourised children get CSB (Corn Soya Blend).  When the programme was starting there was high enrolment.  This was before the expectation of the rain, but in May and June there was a little rain so people went far looking for greener pasture, and so enrolment declined.

“But  the rain did not fall sufficiently, and there was not enough for the whole population, and so in June and July we have experienced a high influx of new cases because people are suffering from not having enough food and water.

“There are 4 teams that go to the outreach sites, and we serve 24 sites.  These are all places where there aren’t any health services. We do the health treatment in these areas.

“On Mondays we pack our luggage for the week, high energy peanut paste and CSB, and leave Wajir for the bush in a car.

“I provide treatment, do screening, see any sick child, see children who might need referrals to the Stablisation Centre at the hospital in Wajir. Then we proceed towards the next site, spending the night in a tent which we pitch, in a secure place in a town close to the next site.

“The roads are very bad and it takes longtime to go anywhere. Often the vehicle gets stuck in huge sand dunes, so we have to take our spades and remove the sand and sometimes we have to push the vehicle.

“We stay in our tents from Monday until Saturday when we return to Wajir.  The distances we have to travel are so big that it is better to stay en route so we don't have to travel so far each day.

“I enjoy it because I know that because of Save the Children, we saving a great many lives. I don’t see the obstacles we face as a burden because we are saving so many lives.

“And there are many obstacles - there is a high population of children. A mother may have 8 children, and 1 or 2 are in the programme and maybe the mother herself.

“There is a huge lack of water in some areas. There was one time when I saw about 100 people queuing with their jerrycans.  This was at the furthest site from Wajir.  There was very little rainwater grabbed during the small rains. it was their last source of water.

“Save the Children is providing water trucking in some areas and so I gave the details of this area to them so they can truck water there.

“There is poor phone network in many areas far from Wajir so it’s difficult for people to communicate their problems, so we try to carry their messages for them.
“Many many people are migrating into the villages from the bush because their livestock have died.  They are settling in the villages to look for help.  Some walk so far to get help, they have to walk overnight on the way to the site.

“It’s really rewarding when you help a suffering child, give them treatment and the nutritional food and then when I do a follow up I find the child playing around after a month. It makes me feel great.

“One event that I will never forget is when I went to my one site without outside communications and came across a woman who had been in labour all night.

When the community saw us arrive they were very happy, and as I was the medical person in the team i went to see the mother and realised that she had umbilical cord prolapse.

Also she was bleeding. She had placenta previa. The mother had no energy. In the first instance, i resuscitated the mother, put in a canyula with dextrose, and put the mother in a position so I could feel if the placenta was pulsating.

After listening I could tell it was still pulsating so I knew we had a good chance of saving the baby. So I left my team and took the woman with me on the two and half hour drive to the general hospital in Wajir.  When we arrived she was rushed to theatre immediately and gave birth to a bouncing baby boy.

“I was so happy. I had saved the life of the mother and her child. I don’t think she would have survived if I hadn’t been there.

“There was this other time, with a child from the bush. The mother looked after the few camels and goats she still had left and the child had become very sick and malnourished. She looked like a skeleton.

“She was 12 months old and told me the child had been like this for two weeks. She had looked for a medical facility but because of the distance it was difficult.

“But then a friend told her about Save the Children.  This friend knew about us and so the mother brought us the child. The child was critical.

“I pleaded with the mother to take her to hospital but the mother declined. She said if we referred her she would have to go with her to hospital and then who would look after the two children she’d left back in the bush? Their father had gone with their few camels left to look for pasture. The mother said this one child's life is coming to an end, she will die, so there is no point in me wasting my other two children who are in the bush to take this one to hospital.

“So I came up with an alternative - if I go with my vehicle and look for your other two children to get them and bring them with us will you bring the other child to the hospital.

“She agreed and off we went in my vehicle. The worst thing is there were no proper roads where they lived, so I had to take a panga (machete)  to cut through the bushes.

“We picked up the kids and handed them to their grandmother who lived in a village while I took the mother and the sick child to the Stabilisation Centre in Wajir.

“The child was put on medication, and F75, formula milk.I had put an IV drip on the child straight away, because sometimes there are delays at the hospital, because they are so busy so I have to do it when I'm in the bush.

“The child was taken to the inpatient ward and the following week and I visited her and found that she had really improved. She stayed in hospital for 10 days and then was discharged.

“We enrolled the child in our programme. That was 2 months ago. She is now very OK. I saw her this week and the mother smiles whenever I see the child.

“Malnutrition has many long-term affects – it damages their early milestones and thinking capacity. Their immunity is much lower so other diseases come in, they are more susceptible.  And often they will not grow, they will become severely undersized.  The situation is getting worse because of the prolonged drought which is getting worse by the day.”