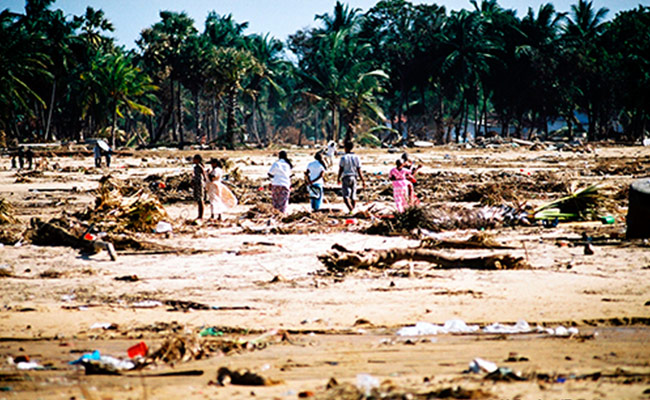 Survivors search through what remains of their homes, Kalmunai, Sri Lanka 2005.

The Asian tsunami on Boxing Day 2004 saw an unprecedented outpouring of generosity from the British people. They gave £392 million to help those hit by the huge wave in the Indian Ocean, and in one 24-hour-period gave more than £10 million, a world record for charitable giving.

Yet despite the enormous loss of life – around 230,000 people died in the tsunami – it wasn’t the world’s worst ever natural disaster. Cyclones in Bangladesh and earthquakes in China take the grisly top spots.

What made the tsunami exceptional was its geographical spread: a massive earthquake off the coast of Sumatra, Indonesia, triggered a 500mph wave which hit seven countries around the Indian Ocean, all the way to distant Somalia. The wave battered thousands of miles of coastline and affected the lives of millions of people, with Indonesia, India and Sri Lanka taking the brunt of the damage.

Unusually for a huge natural disaster in the developing world, large numbers of westerners were affected. An estimated 10,000 British citizens were affected and 149 died, many of them in the beach resorts of Thailand and Sri Lanka. The large numbers of photos and easily available English-speaking interviewees brought the horror of the disaster home to people in the UK in a unique way.

The challenge for the DEC’s member agencies was immense. The initial relief process was huge and complex, running across many different countries and requiring many staff. Agencies supplied water, shelter and sanitation, helping to keep hundreds of thousands of people alive in the chaos.

In response to the size and scale of the disaster, and considering the funds at its disposal, the DEC decided the money should be spent over three years instead of the usual eighteen months. Member agencies were faced not just with recovery work but wholesale construction, a task normally undertaken by governments or the private sector. They were stepping into uncharted territory.

Building entire villages turned out to be a very difficult task. Firstly, where to put them? Before work could begin on new homes the question of who owned what land had to be resolved, and this was often a complex and drawn-out process taking years.

In Aceh, the worst-affected area of Indonesia which saw the bulk of the house-building, many of the original land owners had died in the disaster. The number of inheritance claims soared, overwhelming the local courts and other bureaucracies, who further struggled to process claims because land ownership documents and personal ID such as birth certificates had been destroyed by the tsunami.

The situation was complicated because land ownership was based on a confusing hybrid of feudal, colonial and post-independence laws and customs. Land boundary markers, like trees and paths, were washed away, many areas had become salinated and unusable and some land had been taken by the sea and simply didn’t exist any more.

Progress was slow and the aid agencies faced a lot of criticism. After two years only half the number of houses needed in Aceh had been built and 100,000 remained in temporary barracks. The New York Times described the process as “a mixture of progress and disappointment.”

Despite the multitude of problems, the DEC’s member agencies were not deterred, and in the end built more than 13,700 houses, 55 schools and 68 health centres using DEC funds, plus another 6,200 houses using funds from elsewhere. In Aceh member agencies constructed almost 20,000 houses – around 15% of the number needed.

An independent review said: “DEC members have made a major contribution to rebuilding houses for the communities in India, Sri Lanka and Indonesia, as well as in re-establishing livelihoods of the communities, including the most vulnerable.”

However the ambition was not just to build but to “build back better”. Poor, vulnerable people, many of whom were worst affected by the tsunami and least able to pick themselves back up again, were to enjoy better houses and improved livelihoods after the tsunami than before.

Improving livelihoods was as hard as building homes. In the initial rush to provide aid to poor fishing communities many agencies replaced lost boats with new motorised ones. Suddenly forced to pay for fuel (which was not part of the assistance package), the cost of fishing went up and many fishermen found it too expensive to carry on.

Building on this experience many agencies took a more sophisticated approach. Rather than simply providing goods or capital, they began to look at how they could help poor people diversify their incomes and do more valuable work. Much of this work was focused on those on the edges of society, such as the very low-caste women in India who were helped to shift from poorly-paid fish drying work to the more lucrative business of cultivating and selling crab.

One of the most successful projects involved the Irula tribe in southern India, an outcast group of snake and rat catchers who also work as fishermen. The tsunami had destroyed their small boats and salinated their backwater fishing grounds, destroying their income at a stroke. Funds raised by the DEC built them new homes and for the first time ever they went from working on others’ boats to owning their own sea-going vessels. In just a few years the Irulas had broken a centuries-old system of repression and exclusion, a change the DEC’s independent evaluation described as “phenomenal”.

Nine years on and the tsunami is firmly in place as a world historical event, to the extent of being the subject of a Hollywood film. The emotional scars remain but in many places the physical evidence of the tsunami is disappearing, as booming Asia replaces shacks with new sea-front hotels. But the tsunami remains one of the defining events in the history of international aid and disaster relief, forcing new approaches and new thinking. Its legacy will live on for a long time to come.