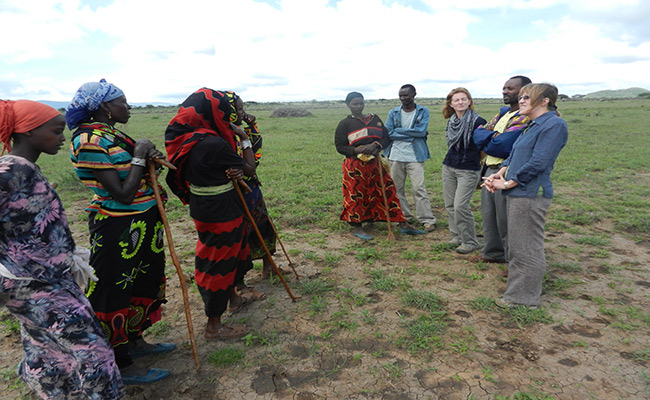 An eleven hour drive south from Addis Ababa brings us to Yabello the main town of the district of Borena,. Initially this looks like another of the small villages that we have passed through on our journey to visit some of the DEC funded projects. But Yabello is much bigger than initial inspection suggests with over 18,000 people living here. This area is home to the pastoralist people whose traditional way of living is through rearing livestock. The preferred animals are cows and camels but goats are becoming more widely raised now as an easier to keep and more drought resistant alternative. Pastoralists will move their cattle over large areas to find pasture but are finding this way of life is increasingly difficult.

All the people we meet, from local communities, aid workers and government officials have told us the same thing: in the past the droughts would come once every ten years, then they started to occur once every five years but in the last 6 years they have occurred once every 2 years. This means that their normal ways of coping with drought, finding food for their cattle and having money to feed their families are no longer possible without outside help.

We are visiting several projects with DEC member agencies HelpAge International (and their local partner SOS Sahel), Oxfam GB and Merlin.  The projects are mostly another hour or two from Yabello in more remote parts of the district travelling on unmade roads more like cattle tracks in bright red earth. In some places there is mud because the small rains that are expected at this time of year have come and this has been a relief but also brings challenges because the tracks can become very difficult to pass for the heavy vehicles that transport the foodstuff or equipment for the projects.

The first project is distributing enough grain and beans for older people in Dida Mega to help them and some of their family to cope for a month and some cash to buy cooking oil and spices, which are used to turn the grain into meals.  It is helping mainly elderly women, and some men, who have been nominated as the most needy by their community group because not everyone can receive the aid. The pastoralists are very community minded and when asked about how they will use the grain they say it is important to help their family to cope in the drought conditions but they might also share with their neighbour so that their neighbour might help them in other times. It is heart-warming to see that although they have been chosen and it’s clear that it has been a very tough time the support they are now getting maintains the sense of community. The older people bring family or neighbours to help them carry to grain in some cases over 10 kilometres back to their homes. They find creative places to keep the money safely tucked away too!

The next two community visits are to Oxfam projects, both will improve the local environment now and for the longer-term; ways to feed and provide water for the livestock as well as the community. A group of men and women are working in the countryside, there are no formal field systems but they are clearing the ground of bush and coarse plants which sap the soil of nutrients, some bushes are harmful to human health and have thorns harmful to the animals. These workers have been classed as vulnerable and chosen by the community because they have lost their livestock in the drought and will struggle to feed their families. They have brought their own handmade tools and have been working in this area for two months already, soon the ground will be ready to rest to allow the nutrients to return and then they will receive seeds for planting the area with grasses for pasture. The workers both men and women agree it is hard work but they want to do it and they will be paid for their work partly in grain and partly in cash. This combination gives a monthly rate of 700 birr (around £30 per month) per worker and only one worker per family is allowed.  There was initially disagreement about how workers should be paid, with the men wanting to receive cash, and the women wanting to receive grain. The partner NGO arranged for men and women to first discuss their ideas in separate groups, then brought them together to reach an agreement. They finally decided on mostly grain with some cash, and that the cash would be given to the women to purchase items for the family.

The next programme in Gorille involves even tougher work but the results are very impressive. This is a traditional well project, cutting through hardened soil and rock to create a safe 2 metre wide, 4 meter deep set of paths around half a mile long that will take the people and their animals down to a set of ponds filled by the local people from a natural well buried deep underground.  These wells had been lost due to soil erosion from drought and ‘the wrong sort of rain’ but digging out new wells will leave them better able to withstand future drought. The men cut through the earth and rock and the women take away the rubble. We ask the people working who can do this job and they explain that the community chose them but children under 18 and anyone over 65 are not allowed to work. As with other projects they will receive cash and grain in payment for their work but they see the wells as a very important way to improve their life.

Finally Merlin is training local health workers from all of the centres in Borena. They will share what they learn with other health workers and the community to help identify the early indications of malnutrition and disease from food shortage. The will also work with others to draw up plans to reduce the risk of health problems from future droughts through water purification and the use of mosquito nets to help prevent malaria. When asked how they will make sure their new knowledge is reaching people and making a difference they say that the plans they will be making will be checked regularly during the year by them, the government, the NGOs and the results will become part of how the risk reduction can continue in years to come.