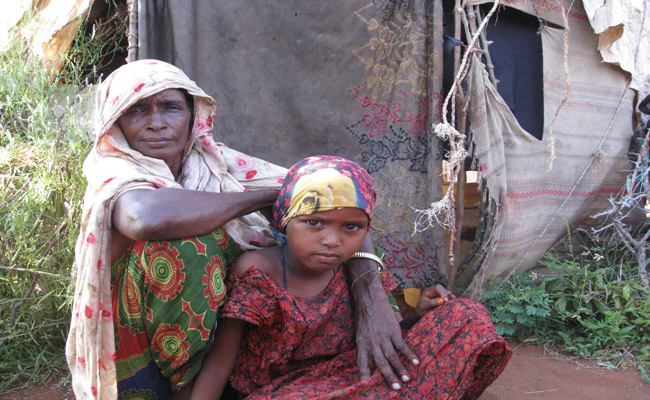 Wajir is an arid region of northern Kenya populated mainly by Somali pastoralists. There have been a series of dry years going back as far as 2006 making the 2011 drought particularly devastating.  Even before the drought reached its peak last year, more than half the cattle on which the people depend for their livelihoods and as a store of value had died.  When the rains did finally arrive in October 2011 many weakened cattle succumbed to hypothermia or disease.

The earth is dry and dusty again now, many of the hardy plants that live in the region have died but others have sprung to life so the scrubby landscape is surprisingly green.  Many of the people who have survived the drought themselves have few if any animals left so the now abundant grazing available does not mean they can fully support themselves.

The village is about half an hour’s drive from Wajir town along a rutted dirt road.  DEC member agency Islamic Relief is providing a regular food distribution here using food provided by World Food Programme (WFP) as residents have lost much of their livestock and are not yet fully able to support themselves.

In the village I visited one of the 17 shallow wells that Islamic Relief has upgraded in the region using DEC funds.   The old open-shaft well from which residents used to haul water with a container on a rope has been de-silted and sealed.  A very robust and easy to use hand-pump has been installed and the run-off now feeds a water trough for cattle.  It now serves about 720 people.

There are several benefits to these changes.  The first and perhaps most important is that the water in the well is now kept free from contamination.  This means the water is always clean and safe to drink which was not the case previously.  This matters in a food crisis because malnourished children in particular are acutely vulnerable to diseases and frequently die from something as simple as a bad case of diahorrea.

Halima (pictured above right with 7 year old grand-daughter Fardosa Muhammad) and her daughter’s children used to have many goats and now they have only four.  They are dependent on the general food ration distributed by Islamic Relief.  I asked Halima what difference the new well had made, she said: “My grandchildren used to be sick all the time, now they are no longer sick.”

The de-silting means that the well can now produce substantially more water, more quickly which reduces the risk of conflict when other sources of water become scare.  The physical effort of raising water for both people and cattle has been greatly reduced which in a food crisis matters because people are not consuming enough calories to maintain their body weight, let alone exert themselves.

Villagers I spoke to were grateful to Islamic Relief for providing the well and knew from the sign posted nearby that it had been funded by the DEC.  They wanted to thank Clive and I for our part in providing their new well.  I explained the money for their well had been raised by ordinary people in the UK, who gave a bit from their hard-earned wages, by people who ran races with support from friends, family, colleagues or neighbours, and by school children who organised fundraising concerts.  I said I would pass on the thanks of the village of Kukale to these people.