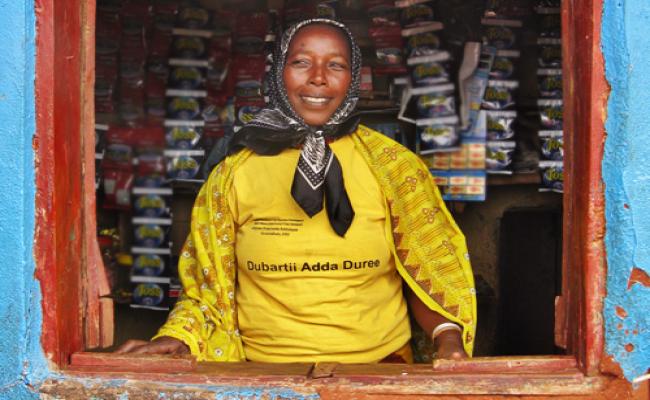 Dama Godona is a single mother and animal herder who lives in a southern Ethiopian region affected by the current east African drought. But her story differs from that of many of her neighbours thanks to having also become a shop keeper, using loans from a CARE project.

Consecutive failed rains in the Borena region, where she lives, did not provide enough water to sustain the cattle of the region’s animal herders. Having lost seven out of her 17 cattle, Dama used all of her savings to purchase animal feed and water for her livestock. She plans to sell another six to buy more cereals, animal feed, and water.

The people of Borena depend on their cattle, goats, sheep and camels. Due to the drought many have died, leaving people without assets or any source of income.

What people need most

CARE has conducted focus groups with men and women in the region, to learn how to best address people’s needs. 43-year old Dama stands out from the rest of the group. She exudes confidence. She has also experienced hardship in her life.  Her husband died in a car accident. Since then she has taken care of her four children alone.

Dama leads the discussion, speaking out on behalf of her community. She clearly outlines what they need now in order to adapt to drought. Asked what their most important needs are, Dama states food for their families, animal feed and increased access to water, but also support for Village Savings and Loans Associations (VSLAs).

Through CARE’s Regional Reliance Enhancement Against Drought (RREAD) project she took out two loans of about £70 each through a VSLA over the last four years. With them she bought emaciated cattle at a low price, fattened them up and sold them for a profit. With this profit she was able to open a small road side shop.

Since opening the shop she has paid off her loans. She is now head of the association which helped her protect her assets and care for her family. Dama’s position as both an animal herder and a shop keeper makes her quite unique in this region.

Dama clearly sees the advantage of diversifying her work. She urges others in her community to follow her example. “It is important to diversify ones livelihood in order be less affected by droughts,” the 43-year old says. In her eyes, diversification decreases risks and increases opportunities.

While Dama is affected by the current drought she is able to use her second source of income to maintain her cattle and take care of her family. Dama proudly states, “I am not dependent on cattle because I have a shop.”

Dama shows that prevention is the way to help individuals in times of drought. Increasing an individual’s ability to work in a variety of ways can spur entrepreneurship, create employment, generate income and ultimately empower that individual.

Additionally, her story shows that when Village Savings and Loan Associations are used correctly they can help people provide for their families and reduce vulnerabilities associated with drought. Hopefully, Dama’s example will not be so unique in the near future.