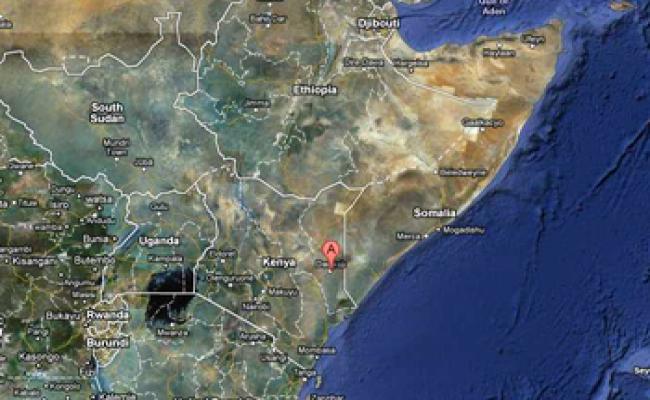 DEC Chief Executive Brendan Gormley writes about his recent visit to East Africa to view the situation in the Dadaab refugee camp. He travelled with UK Secretary of State for International Aid Andrew Mitchell and the head of Save the Children Justin Forsyth.

As you fly over this arid, dry and dusty land the vast expanse of tented shelters sprawling across the horizon immediately captures your attention.

There are almost 400,000 people - a number equivalent to the entire population of Bristol - residing in these settlements.  On the drive towards the camps of Dabaab you see many new arrivals huddled beneath flimsy makeshift shelters.

It is a tragic sight to behold and a symbol of the painful reality that hundreds of thousands of refugees have had to survive in such harsh conditions.

Medics and aid workers are now coping with a huge influx of people who have travelled from the epicentres of the drought and walked for days in desperate search of food.

Alongside these harrowing scenes there are reassuring sights of babies who now have every chance of surviving this catastrophe. But then you notice the sore, blistered feet of the mothers and grandmothers who have trekked for miles to find food and shelter for these infants.

When some of these babies are returned to their families they face a considerable risk of relapsing. The scale of needs means that families are sharing what they have and the most vulnerable suffer when there is not enough food to feed all the family.

Many have travelled from south and central Somalia from regions devastated by drought. The irony of this situation is these survivors are the lucky ones.  Those they have left behind are at greater risk.

I was in Somalia in 1992, the last time a famine was declared.  All the indicators are that the conditions which I saw and never ever wanted to see again have returned.  Charities who have been working in Somalia since the famine of 1992 have not received the support they need and deserve. Their cries for additional help to reach the millions at risk have not been heard.

There is an urgent need to reach the epicentres of this unfolding tragedy. I have come away convinced of the need to warn the international community that this humanitarian emergency must be taken seriously and welcome the UN’s authoritative statement on the famine.

Many of the people arriving in Dabaab are from Somalia’s most productive farming areas. Areas that should be the last line of defence against drought  But now the situation is so severe that even these resilient farmers have taken to the road in search of food and water. If farmers, who have exploited these flood plains for generations are on the move, this is a terrible sign of the consequences of this disaster.

As I travelled through Wajir in north-eastern Kenya, it became clear that the needs of many villages in this region are just as acute those in Dadaab. In addition to getting life-saving aid into southern and central Somalia, we need a massive parallel expansion of relief in northern Kenya.

I was incredibly moved to see the dedication of Kenyan nurses in the nutrition centres in Dadaab and Wajir. These nurses and their international colleagues were for keen for us to tell the story of this tragic, unfolding crisis to rally the world’s compassion.