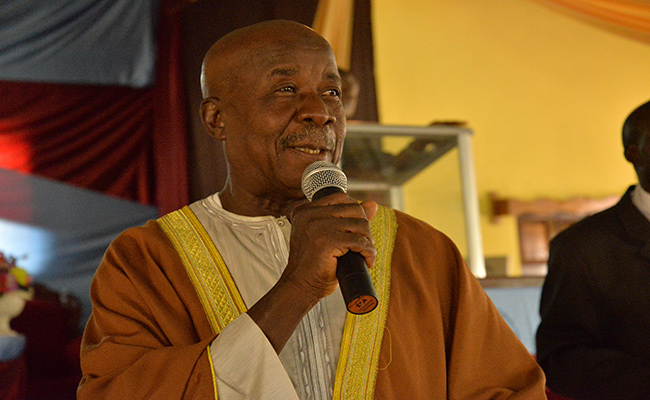 Faith leaders across West Africa are using their unique position of influence within  communities to speak out and help stop the spread of the deadly Ebola virus.

CAFOD, Christian Aid, Tearfund and World Vision are working through established religious networks across Guinea, Liberia and Sierra Leone to educate communities about the symptoms of Ebola, offer support to people affected by the outbreak and ensure survivors are not stigmatised when they return home.

With most public gatherings banned across the affected countries, places of worship are one of the few locations where people can receive vital information about the Ebola outbreak.

The authority of faith leaders allows them to play a vital role in challenging the myths and misinformation surrounding the virus and offer life-saving advice to their church or mosque congregations on Ebola protection and prevention methods. Churches and ecumenical groups have also been donating essential food and hygiene supplies to at-risk families.

Traditional funeral practices have been highlighted as one of the greatest causes of the continued spread of the disease. As a result, agencies are working with Christian and Muslim leaders to teach communities about the importance of safe but dignified burials.

CAFOD is working with priests, imams and traditional faith leaders to spread the word about hand-washing and safe sanitation and distribute hygiene kits. Its church partners are promoting safe burials and supplying food to vulnerable families. CAFOD is targeting 54,000 people in Liberia, 129,000 in Sierra Leone, and 28,000 in Guinea.

Bishop Anthony Borawah, from CAFOD partner Caritas Liberia in Gbarnga, Liberia, said: “It is the poor who are the church’s priority. This disease makes ordinary human kindness impossible – like putting your arm around someone who is crying. The key to survival is to keep our humanity intact in the face of this deadly Ebola virus, and as a Church we are finding ways to do this with our communities.”

Long-standing Christian Aid partner the Methodist Church of Sierra Leone (MCSL) is using its existing community health and HIV networks to challenge Ebola stigmatisation. The organisation has trained over 50 Methodist ministers to promote good hygiene and safe burials, and to encourage communities to respond to Ebola survivors with acceptance, not rejection. Methodist churches nationwide are also displaying educational materials on their premises.

Francis Musa of the Methodist Church of Sierra Leone said: “Stigmatisation is a very serious social problem when it comes to the Ebola virus, as used to be the case with HIV. We have challenged HIV stigma and are now doing the same with Ebola. Those who have survived the virus find it difficult to be accepted back into their communities, so our ministers are preaching that people should accept their brothers and sisters, while still observing health guidelines. They are also teaching people about burial practices: we are pushing these messages in our churches across the country to try and break the chain of transmission.”

MCSL and other denominations are members of the Council of Churches in Sierra Leone, which has set up a national Religious Leaders’ Taskforce on Ebola. Christian and Muslim leaders on this taskforce are collaborating with other partners to provide food to vulnerable households and offer psychosocial care to health workers, affected families and children under quarantine.

Tearfund is working with over 1,000 churches in Sierra Leone to improve awareness of how to stop the virus spreading. Radio stations run by Tearfund partners have been broadcasting life-saving health messages, reaching hundreds of thousands of listeners.

The Rev Jonathan Titus-Williams, General Secretary of Tearfund partner Evangelical Fellowship of Sierra Leone, said: “People are responding positively to the work these pastors are doing, as in most communities in this country people have trust and respect for religious leaders. Right now, one of the problems we have in Sierra Leone is lack of trust for political leaders and for officials involved in the Ebola crisis.”

Again, in Sierra Leone, World Vision has reached out to 30 key faith leaders in churches and mosques that serve large local populations to help tackle stigma. Through a consortium with other aid agencies it plans to reach over 8,000 faith leaders and key community figures, with a potential to influence over 1.5 million people.

As well as providing burial teams that are fully equipped to safely deal with victims, World Vision staff have been advising Christian and Muslim leaders on how to best tailor burial practices to prevent the risk of infection.

David Thomson, Director of Policy and Programming for World Vision UK, said: “We have strong ties to faith communities, having worked with both Christian and Muslim leaders to support our development work in the past. This allows us to disseminate health promotion messages through faith communities more rapidly and more effectively, drawing on the additional influence and trust they have amongst local populations.”

With the World Health Organisation warning of a potential 10,000 new cases a week by the beginning of December, the faith-based agencies within the DEC are now appealing for church congregations across Britain to support the Ebola Crisis Appeal to help stop this medical crisis becoming a humanitarian catastrophe