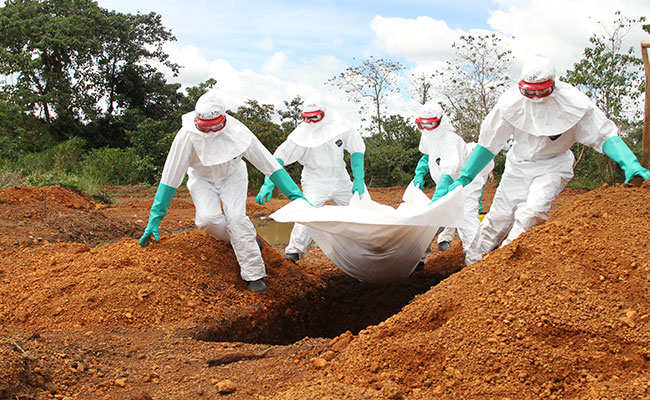 Member agencies of the Disasters Emergency Committee (DEC) are planning to significantly increase support to workers and volunteers burying thousands of victims with money donated by the UK public to the DEC’s Ebola Crisis Appeal.

Almost 5,000 people have died in this year’s Ebola outbreak, with the World Health Organisation warning that measures to stop the spread of the virus are essential to prevent up to 10,000 people a week being infected by December. DEC member agencies are planning to assist the safe and dignified burial of potentially tens of thousands of people in the fight against the disease.

The British Red Cross, a DEC member agency, has helped teams to safely dispose of 3,595 bodies since March, ensuring safe and dignified burials for 75% of Ebola victims across the three affected countries.

Daniel James, who has volunteered with the Sierra Leone Red Cross since childhood, and is now leading the agency’s body management team, said:

“More communities are beginning to notify authorities when someone passes away at home, which is great. However, there are still many other communities who do not believe Ebola is real, and who continue with the local custom of preparing bodies for burial themselves.

“I keep going and working, despite all the red flags, because it is the right thing to do. My pride stems from what we do in these hard times. It allows me and many others with a similar mind-set to do the right thing, while creating as safe environments as possible.

Aid organisation World Vision UK is working alongside CAFOD, a sister DEC member agency, to set up 39 burial teams around ten districts in Sierra Leone to bury people in a timely, safe, and respectful manner. DEC member Concern Worldwide has likewise increased the number of its grave digging teams to 40 and is supplying a system of documentation of graves to provide families with the knowledge of where their loved ones lie.

“Nothing symbolises the terror spread by Ebola as much as funerals staffed by people in protective clothing, but the safe disposal of bodies by these unsung heroes is one of the most effective means of stopping the spread of the virus.

“It is critical that the families of victims are informed in a sensitive manner why they cannot come into contact with their loved one’s body or why they might not be able to follow many other cultural burial practices, if we are to avoid people seeking to bury family members in secret.”