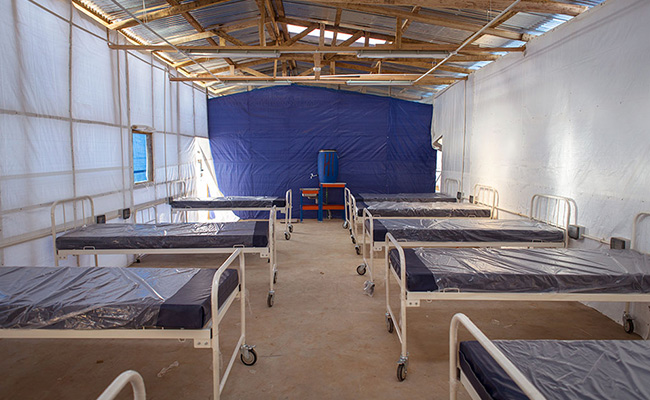 Save the Children treatment centre at Kerry Town near the Sierra Leonean capital, Freetown

DEC member agencies are rapidly stepping up their support for the fragile health systems struggling to cope with the Ebola outbreak in West Africa.

Today, a UK government-built treatment facility opens in Kerry Town, Sierra Leone, to be run by Save the Children. The facility at Kerry Town south of the capital Freetown includes a new blood testing laboratory. The centre also provides dedicated beds for infected healthcare workers and separate sites for confirmed and suspected cases.

Save the Children chief executive Justin Forsyth said: "The Ebola crisis that's affecting Sierra Leone, but also Liberia and Guinea, is so enormous. We're in a race against time to make sure we can prevent it spreading but also to treat people who have got Ebola and to build on for the future."

The Red Cross has been running a 60-bed treatment centre in the Kenema district, one of Sierra Leone’s worst-hit areas, since September. So far, 143 people have been admitted, with 42 patients discharged free of the disease.

John English, Ebola Response Manager at the British Red Cross said:  “Our treatment centre in Kenema has been providing care to people who have been diagnosed with Ebola from across the country, but there are still Ebola patients who don’t have anywhere to go – who are not only being denied the treatment they need but risk passing the virus to members of their family and communities who are caring for them.”

“More resources are urgently needed in order to provide case management beds where patients can be isolated and receive the medical support and care they need.”

With existing treatment facilities still struggling to cope, Plan International is also this week opening five community care centres to care for and monitor patients with Ebola-like symptoms but who are yet to be diagnosed.

Patients who fear they have contracted the disease but who are waiting for test results will be encouraged to attend the centres in Port Loko, another Ebola ‘hot spot’ 45 miles outside of the capital Freetown.

“These interim measures will be a necessary function in providing care in a safe and dignified manner, while reducing further transmission.”