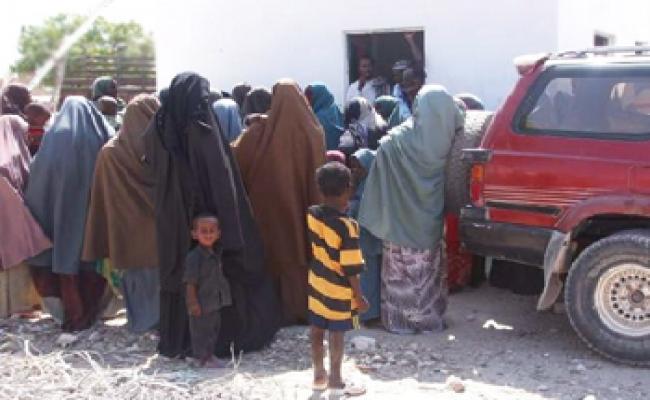 When the child Amran Mohamed Hussein, age 4 years, was first registered in Merlin’s Mesagaway outreach site, she was weak and severely wasted and with complications. The nurse diagnosed her with severe acute malnutrition (SAM). The long drought, and persistent inter-clan fighting claimed the life of her father and wiped out all their animals. Her mother, Halima Ahmed, now a widow and aged 43 years, was left to single-handedly support the family of 5 children. She has no adequate source of income and can barely afford to educate her children or provide them with adequate health care.  Her family’s situation is so dire that sometimes her family goes without food for several days.

El Buur district, where Merlin has been supporting a primary health care and nutrition program for four years, has severely been affected by drought, famine and starvation, coupled with increased insecurity and resource-based conflicts among the predominant nomadic pastoralists over the available meager natural resources. With the depreciation of the value of livestock, joblessness and lack of steady income, the communities’ purchasing power has been negatively affected.  Shortage of food has resulted in rising food prices and starvation, rendering many nomadic pastoral communities destitute with some of them, such as Amran’s family, ending up as internally displaced persons living in shanties.

In mid-August 2011 and with DEC funding, Merlin scaled up emergency health care and nutrition in El Buur and further expanded into Galcaat District of southern Galgaduud Region. With six static health facilities and five mobile teams covering 20 outreach sites targeting an estimated 168,000 people, many children in Amran’s condition will be assisted through free health and nutrition services.

Amran has been enrolled in Merlin’s outpatient therapeutic feeding programme and undergoes regular weight-for-height checks. Treatment using antibiotics and other essential drugs are provided for her and her family as well. Within the first four weeks of her admission, Amran has shown tangible improvement. Health education sessions are given to her family and community on how to treat and prevent acute watery diarrhoea.

Amran is still in Merlin’s feeding programme and is undergoing close monitoring during this interim reporting period. She will be under Merlin’s support until she is discharged from the programme, typically after two months of treatment. The success of her story will greatly depend on continued service delivery by Merlin in Galcaat.