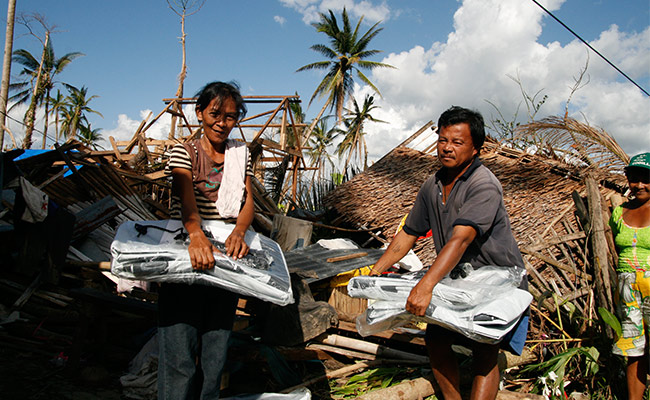 Anita and Jaime’s home – in a remote village on Leyte Island - was flattened by Typhoon Haiyan. The simple structure, made out of wood and coconut leaves, was no match for winds of up to 200mph.

They've been living in a makeshift shelter which they have created from corrugated iron sheeting and bamboo sticks they found in the wreckage of their village.

‘It’s very cold,’ Anita explained. ‘The iron sheeting we found has lots of holes in it, so the water gets in.’

The emergency shelter kit - consisting of large pieces of tarpaulin, ropes and cleats - will keep the rain out and help them stay warm.

Clutching a piece of tarpaulin tightly, Anita said: ‘I am thankful that this help has arrived.’ But, with their ability to make a living blown away in the storm, Anita and Jaime will need help rebuilding their lives in the months ahead.

They're just two of the 4 million people who've been left homeless as a result of Typhoon Haiyan. In all, more than a million homes have been damaged.

In the coming weeks we aim to reach more than 100,000 people with emergency relief following Typhoon Haiyan, but we urgently need your support.