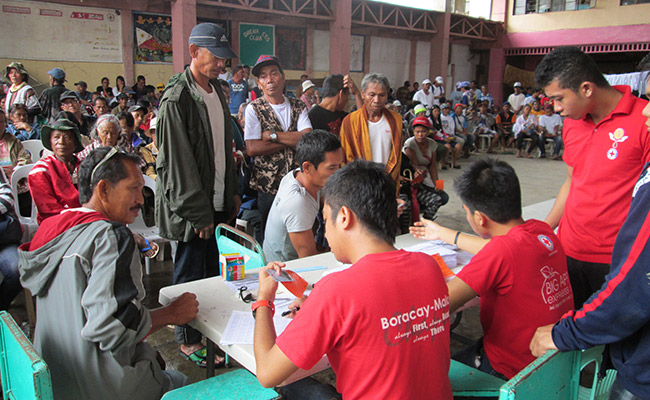 From reuniting families to handing out clean water, the Red Cross Red Crescent Movement (of which the British Red Cross is a member) has supported people affected by Typhoon Haiyan in a huge variety of ways since the disaster hit the Philippines.

The Movement has already given food to more than 950,000 people in the country’s worst-affected areas.

And in the months ahead Red Cross staff and volunteers will help some people with cash transfers – money they can use to survive and recover from the disaster.

Why does the Red Cross hand out money?

Humanitarian organisations are using cash transfers more and more, according to British Red Cross aid worker Kate Ferguson. In the Philippines, the Red Cross aims to give cash transfers to 50,000 families affected by the typhoon.

Explaining the appeal of cash over other kinds of support, Kate said: “It’s giving people the respect they deserve. If your house had just fallen down, would you like someone to give you vouchers or money you could spend on whatever’s appropriate?”

Of course, cash transfers are not always a practical option. In the days after the typhoon, with many people injured and a lot of shops and roads destroyed, it would not have made sense to give people money to buy blankets and food. Without infrastructure and goods on shelves, spending the money would have been difficult or impossible.

But once markets and traders are back in action, people can use cash to buy essential goods and support – instead of hoping humanitarian organisations can predict what they need. Cash transfers empower people to take control of their futures.

In the months ahead many of those affected by Typhoon Haiyan will want money to rebuild their homes and livelihoods, perhaps using it to buy building supplies, seeds or fishing nets.

In these cases, the Red Cross might ask for a simple business plan or budget. Cash transfers could be paid in instalments, with later payments made on the condition earlier ones were spent as agreed.

Whether we choose to give out money or emergency items like food and tarpaulins, the Red Cross will always work with local people to try and give them the support they want. In the Philippines, cash could be the best option. Here’s why:

Safeguards and lessons from the past

But how will the Red Cross make sure cash is spent properly? In many cases, Red Cross volunteers will help people make cash transfer applications and get to know more about them. By finding out how many people make up a family and if they have any health issues, we can see who is most in need of help.

The Red Cross will also check how money is spent and make sure people can report any problems or concerns. As heads of their households, women will be given the money in most instances.

Cash transfers have been used after disasters before, but have sometimes run into problems. Without good co-ordination between aid organisations, there’s a risk one family could be helped twice – while their neighbours get nothing. And organisations giving out different amounts or using different criteria can cause problems too.

That’s why we’ve joined the Cash Learning Partnership (Calp), which brings together five humanitarian organisations. In the Philippines a Calp official is helping make sure transfers by different agencies are co-ordinated and that they achieve as much as possible for people affected by the typhoon.