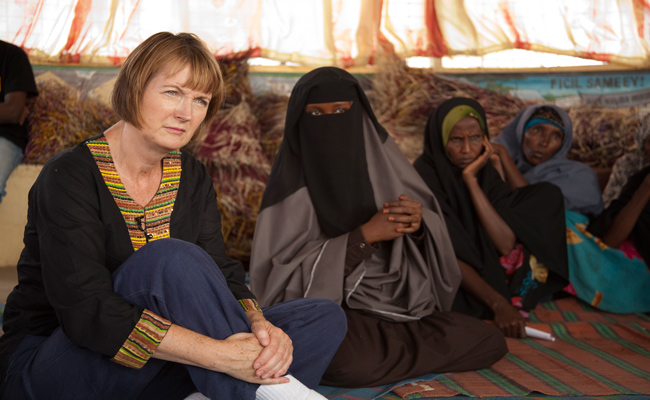 Discussions with the Somali Diaspora in Camberwell and Peckham

Before I embark on a visit abroad I always have discussions with the diaspora community in my constituency. I’m grateful to the Old Kent Road Mosque and Islamic Cultural Centre, for hosting a meeting with the Somali community for me and Islamic Relief. There is, of course, a high level of concern for those who are suffering and being driven from their homes by the famine. Many of the diaspora send money back to their villages of origin.

There was strong support for the work of the aid agencies and for the resources the UK government is putting into the aid programmes in the Horn of Africa. And a determination to provide vocal support for the commitment of the Government to increase the UK aid programme to 0.7% of our Gross National Income by 2013. Concern was also expressed that those in the most desperate need, in the areas most beset by conflict, are the least likely to get the aid. They argue for greater support for those agencies which are working on the ground and greater engagement by the Government with the diaspora community.

The people of north east Kenya are mainly pastoralists: communities who depend on their cattle, sheep, goats and camels for their livelihood. The vegetation in the area is prolific – with a covering of trees and bushes. But, the area is parched and all the vegetation is dry as bones, crisp and brittle as a result of the failure of the rains for 3 years.

Livestock has been decimated by the drought. We saw dead livestock including goats and a huge, beautiful giraffe lying dead at the side of the road.

The people we met in Wajir, all told us of the loss of most of their livestock in the drought. One woman, whose husband was 200 kilometres away herding on the Somali border told me that he used to have 20 cattle and now only has 10. She has 6 children and has to depend on the monthly food pack handed out by Islamic Relief. She was so frail and thin that she was not strong enough to pick up the pack and had to get help to carry it back to her home.

A mother of 5 children told us that she used to have a herd of 25 goats and now only has 5. Some have lost all of the herds they have built up over the years and are now left with nothing.

To protect against malnutrition, and to enable families to survive the drought without being forced to flee their village communities and become refugees, Islamic Relief runs many programmes in Mandera and Wajir, the two districts of Kenya worst hit by the drought . In Wajir they work closely with Save the Children. Islamic Relief’s work in Wajir includes:

Saving the lives of starving children

In the Griftu district hospital, we saw Islamic Relief’s work to restore to health children dying of starvation. I met Nadif Dagane, mother of Ahado, a 4-year- old girl, whose arms and legs were as thin as twigs. She was awake but lying completely lifeless on a bed with her mother. I was told that she was near to death when she was brought in to the hospital, unable to take any nourishment by mouth and also suffering from malaria. But now she is being fed through a tube, they expect her to make a full recovery, leave the hospital in 3 weeks and be looked after with the help of Islamic Relief back in her village.

We visited Kukale village where we met villagers pumping water into their jerry cans and donkeys drinking from the trough supplied from the shallow well dug by Islamic Relief. In Wajir, they have dug or renovated 20 shallow wells and 7 boreholes which provide the villagers and their livestock with constant fresh water and obviate the need for trucking of water which is expensive and which has to be rationed.

The food aid, water supplies and health care that Islamic Relief is bringing to these villages is undoubtedly helping to save lives and protect the people from the disruption of having to abandon their lands.

The evidence that aid works and that famine prevention is possible comes from Ethiopia. The steps the Ethiopian government and aid agencies have taken to provide a “food safety net” for their people has meant that they have not had to become refugees. This is in stark contrast to Somalia where the conflict and lack of access for aid have meant that there has neither been protection from famine nor the emergency relief for people in their home villages.

Our 20 - seater plane flew in to Dadaab, over terrain which is so dry it looks like the surface of the moon. But as we came in to land on the tiny airstrip we saw, spread out in a grid pattern below us, an endless vista of hundreds of thousands of tents. Around the camp is a sprawl of makeshift huts.

The camp was first established back in 1991 in response to those fleeing the violence and hardship in Somalia. It was set up for no more than 90,000.

The director of the camp, Mr Harun Komen, told us that with at least 1,000 more refugees arriving every day, he expects the camp will soon grow from the present 440,000 to more than half a million. His one message for us to take back to the UK and to the rest of the world is that the situation will only get worse unless the conflict in Somalia is ended.

A camp of women and children

I met a group of women refugees in a Women’s Centre run by the International Rescue Committee. They told me that to get to the camp they had to walk hundreds of kilometres with their children. One had walked for 30 days. Many walk at night to protect their children from the searing heat. But that makes them even more vulnerable to physical attack and rape. They are already undernourished when they flee their homes, but when they and their children arrive at the camp they are in an even worse state, suffering from exhaustion, dehydration and malnutrition. All of the women I spoke to said it was the conflict that had caused them to flee. None of them had their husbands with them. Their husbands were either dead or disappeared. 80% of those in the camp are women and children. All of them said that they long for the fighting to be over and if there was peace they would return to Somalia. But the reality is, the longer they are in the camp the less possible that will be.