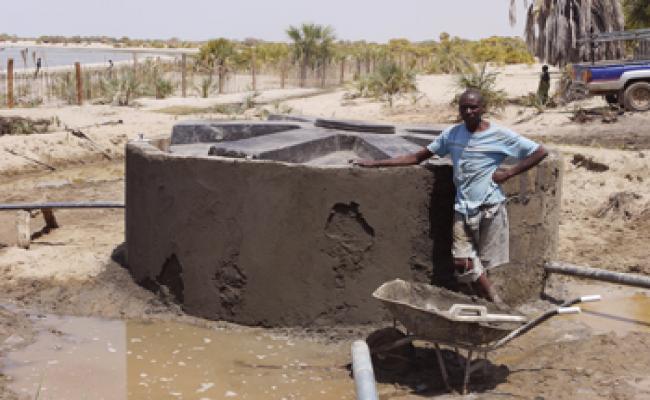 In Lobolo, northern Kenya, the shoreline of Lake Turkana looks like an idyllic desert isle, covered with palm trees and soft white sands. A few men wade waist-high next to a simple dinghy. Not surprisingly, fishing is a main source of food and income here, with tilapia, catfish and puffer fish common catches.

The lake is very salty, though, so getting fresh water is a problem if you live in one of the villages further inland. There is a natural spring just next to the lake. Unfortunately, the lake is infested with crocodiles, and the spring is a few feet from their breeding ground.

Paul Emekwe, a casual labourer working with the Kenya Red Cross to build a pipeline from the spring to surrounding villages, explains the dangers: “You have to walk quite a while for water now. Women and children – especially girls – collect the water. They have to walk an hour to get it and balance it on their heads to bring it home. People are sometimes attacked by crocodiles when they’re gathering it.”

Paul Waikwa, a Kenya Red Cross water and sanitation project officer, is helping lead this joint Red Cross/UNICEF project to pump water to seven communities. Though it’s still being built, they expect to finish in a couple of months.

Paul says: “We have to cover the springs to protect them from crocodiles and other harmful things. It’s hard work – especially when you’re sweating like this!”

The project relies on something Lake Turkana has in abundance: wind.

Paul explains: “We are building a windmill. Wind power will pump the water through 17 km of pipes to seven villages. Harnessing the natural energy reduces costs and makes it more sustainable.

“There are lots of challenges in this area. One problem you have with remote communities is that they have to keep moving to find pasture. They follow the rains because that will bring pasture for their animals. You have to balance the amount of water you supply in pasture areas so you don’t end up exhausting resources in one area.”

The project has taken into account the lifestyles of the Turkana people. Paul explains: “People here are pastoralists, but those who live around the lake also depend on fishing so the communities we’re pumping water to are not likely to move far away.

“If you look at children here, they’re much better than those living in other villages. At least they have fish.”

The Kenya Red Cross has also been rehabilitating some water boreholes, helping communities have easier, safer access to water. The British Red Cross provided £70,000 at the end of 2010 to help the Kenyans rehabilitate boreholes.

For Paul and the Kenya Red Cross team, helping communities adapt to the extreme weather conditions in this part of the country is vital to making sure they can survive future droughts.

“Our water and sanitation work has been focusing on climate change,” Paul says. “We really need to cushion the communities here from climate change and use new technology so it doesn’t harm the community in the long run.

“I was talking to one of the old men here recently and saying ‘This area has always had drought but you didn’t use to need food aid to survive. What happened to your traditional ways of coping?’

“He told me, ‘We used to take the bone marrow from dead cows and grind it to powder for a kind of flour. And we would dry the animal skins and later put it in water so it was edible. But we don’t do these things any more. These traditions have been lost."