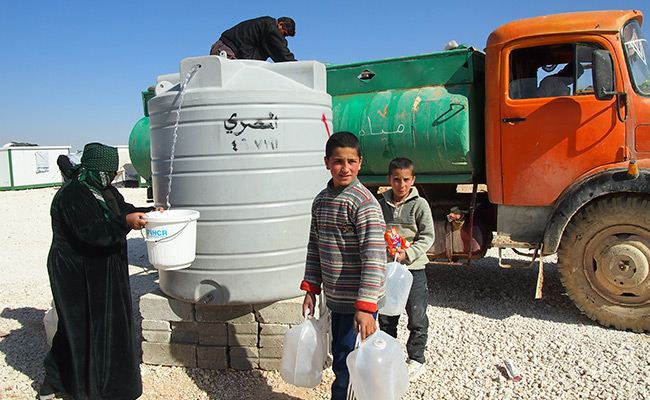 One of them is run by Khaled. But these days he's not at all happy. "There are problems every day", he says, shaking his head gloomily. Apart from his concerns about worsening security at Zaatari camp, whose lines of white tents you can easily spot from his rows of greenhouses and olive trees, one of his main concerns is the shortage of water and the extra strains that the large number of refugees could mean for water availability in the future.

Over three and a half thousand cubic metres of water each day is delivered into the camp at Zaatari, providing the growing numbers of refugees with clean water for drinking, cooking and cleaning. Oxfam is working in the camp, installing water and sanitation facilities for more than 14,000 people.

It's placing a huge strain on Jordan, which is ranked as one of the most water-stressed countries in the world, well before the recent flood of refugee arrivals.

Faced with chronic water shortages, the authorities in Jordan, whose own population has been growing at an annual rate of 3.5%, have been forced to extract more water from the ground since the mid 1980's. It's just a matter of time before the main sources run out. In some areas, groundwater extraction is nearly three times the recharge rate.

In Mafraq governorate, whose population has swollen to twice its size because of the refugee arrivals, and where Zaatari camp is located, problems have already begun appearing. Most households in northern Jordan are connected to piped water which is topped up through water trucking.

The water system is old and creaking; and it is estimated that as much as 50% of water in the governorate is lost through leaks in the water network or by people illegally siphoning water from the system.

In the summer, demands for water surge as temperatures soar and the population increases with tourist visitors and returnee Jordanians coming home to visit their families.

But as early as last month, there were signs of bigger problems to come. For two weeks in February, part of Mafraq town didn't have any water deliveries for two weeks, due to water shortages.

Local people say the refugee influx is making the water supply problem worse than normal. At one meeting, a host community told Oxfam staff that before the Syrian crisis erupted, water used to be delivered twice a week; now, they said, most areas only got water delivered once a week.

The costs of getting water are also increasing. With greater numbers of users and higher water consumption, households are finding the water pipes are running dry more quickly and are having to purchase more water from the tankers - which incurs extra costs.

Most families also pay out extra for filtered water to drink, complaining that the tap water is not good enough for drinking.

But many Syrian families, who arrived with little more than a pocketful of money and the clothes on their back, can't afford to do this; and they've reported an increase in diarrhoeal cases among their young children who have no choice but to drink straight from the tap.

Jordan's water woes are likely to get worse. First, the government is considering scrapping subsidies for fuel and electricity, making it likely the cost of water will soon go up. Some of the country's well fields lie several hundred metres below sea level; and most lie at least 200 metres below ground level. In either case, water has to be pumped out from the ground via generators.

The monthly electricity bill costs the Yarmouk Water Company, which provides water to four governorates in northern Jordan, around 1.2 million JD each month (£1.1m); but the real (unsubsided) cost is more than three times higher.

Back at his nursery, Khaled tells me that he's had to destroy hundreds of olive trees and some of his saplings, because the cost of keeping them alive and watered is higher than the costs he can recoup selling his crops.

As summer approaches, the likelihood is that temperatures and tempers are set to soar, while the country's water tables and wells continue to diminish.