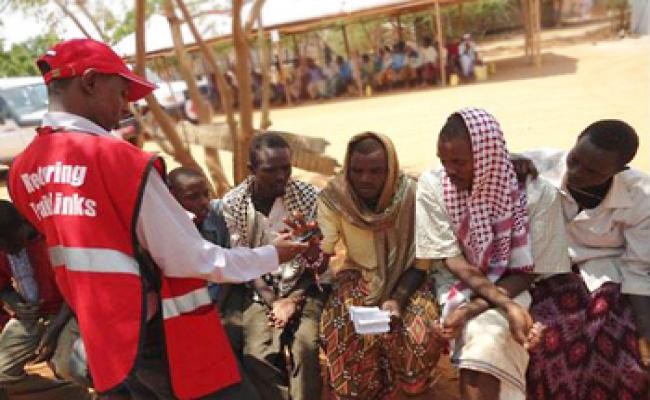 One of the most urgent needs for new arrivals from Somalia is to be able to get in touch with their family members who stayed behind to let them know that they arrived safely and are well.

Over the summer months, an average of 1,500 new refugees arrived at the camp daily. Many of them had horrific stories to tell about a rough journey and were exhausted upon arrival. Helping these people contact their loved ones is a priority for the ICRC and its restoring family links (RFL) services.

RFL services in the four Dadaab refugee camps, about 70 km from the border with Somalia, began in the 1980s and give the refugees the possibility to write a Red Cross message (RCM) to their relatives in Somalia or elsewhere around the world. But you can imagine that it is very difficult to deliver written messages in some areas of Somalia right now, and it takes a long time. So the true innovation here today, is that the ICRC has decided to offer a mobile phone service for the newly arrived refugees: each of them can call a relative for two minutes anywhere in the world to let them know they are in Dadaab and doing fine. It's a very quick, efficient and cheap way of helping these people.

The figures show the success of the new programme: since the first phone calls were made, some 7,200 people have taken advantage of this free service, including almost 800 minors. It is such a reward to see a little boy smile when he finally gets to hear his mother's voice on the line!

There are three tracing teams active every day in Dadaab. One team sets up its tent in the registration area for newly arrived refugees. While the refugees are waiting for many hours to be registered and then transferred to one of the four camps by the Kenyan authorities, the team, made up of ICRC staff and volunteers of the Kenya Red Cross Society (KRCS), gives each of the refugees a chance to make a two-minute phone call to a family member of their choice, anywhere in the world. Most of them choose to contact their relatives left behind in Somalia, but some also get in touch with their families abroad, in the U.S. or Australia for example, or in Kenya. One person even managed to call his relative in Libya!

Two other tracing teams are mobile and go to different locations every day, north and south of Dadaab. They use a "tracing kit", basically a big metallic trunk that contains everything that is needed for the service to run: the charged mobile phones, lists with all country codes from around the world, ICRC  flags and aprons, and stopwatches for the volunteers to make sure everyone respects the two minutes time allocated The work of the KRCS volunteers in the field is essential. As many of them are originally also part of refugee communities in Kenya, they speak some of the local languages of Somalia and can help the refugees understand and benefit from the free mobile phone service.

For the time being, the challenge is to make this service known to the newly arrived refugees in Dadaab. They are exhausted when they finally reach Kenya, and scared. Very often they seem to be in shock, and because they are given so much new information on their first days in the camp, it is hard for them to handle and process all of it.

Another challenge for the joint ICRC / KRCS teams is the harsh climate: it's very hot, dry and dusty, which doesn't make for easy working conditions. The staff work tirelessly and are doing such an important work, and the service is highly appreciated. For example, an old Somali man cried when he finally got in touch with his loved ones. In Somali culture, that is not something you can see very often. The phone calls are very emotional at times, also for the volunteers who monitor them.

The ICRC is committed to supporting the restoring family links efforts together with the KRCS as long as necessary.