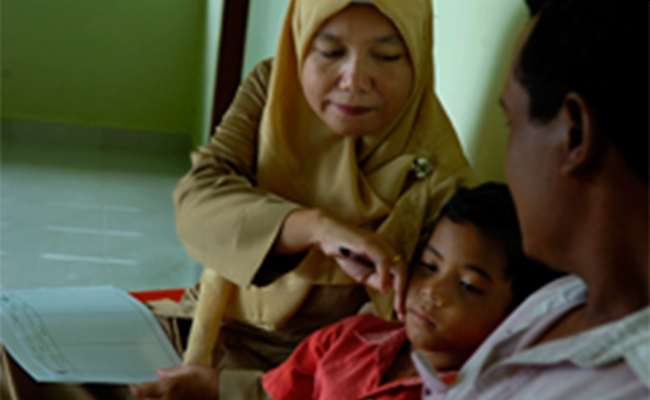 When the tsunami flattened the coastline of Aceh, it crushed the health system as well. Most health centres were damaged or destroyed and many health workers were killed. For midwife Syamsidar Harahap this meant she lost many friends, colleagues and the health centre where she worked.

“I had just delivered a baby,” recalls the 37-year-old, “the wave came as I was putting the last stitch into the mother.” Harahap ran to the hills, barely escaping the disaster. Two colleagues at the clinic and the mother and baby died. As for the health centre: “There was nothing left: not a wall, not a cupboard, nothing.”

Harahap was lucky to survive, as were her husband and two sons. She has now moved into a new home and is head of the new Lhok Buya Health Centre built by Merlin. The centre serves four villages and patients trickle in steadily, averaging about 20 a day.

Riza Nurdin, who has brought in his seven-year-old son Irfan to the clinic says “It’s a relief, because going to Calang [the nearest town], though it’s not far, bringing a sick child there in the rain for help can be stressful. And children can get sick often!”