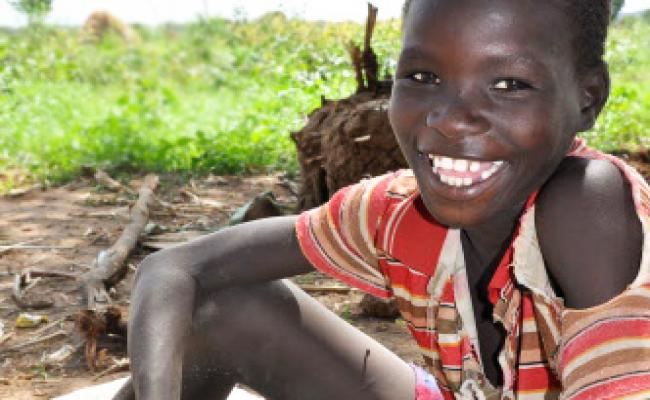 Turkana County has often been identified with drought and hunger, year in and year out residents continue to suffer from the severe effects of perennial droughts. With this, many hold the assumption that farming are impossible in the hostile Turkana environment and consequently many residents only rely on relief food.

However, this assumption may soon fade thanks to projects like Morulem Irrigation Scheme (MIS) that is changing the face of Turkana. Spanning over three decades, MIS currently feeds 3,000 families. The gravity-fed irrigation sits on 1,500 acres of land and uses water from Kerio River situated about 10 km away.

At a time when the food situation in some parts of Turkana has hit emergency and crisis levels, farms in the Morulem scheme are flourishing with an assortment of crops (from maize, sorghum, kale and other traditional vegetables).

Linah Namo, a mother of two, is a beneficiary of the scheme once supported by World Vision and funded by United States Agency for International Development (USAID) between I992 and 2001.

With half an acre of land, Linah comfortably feeds her family and is able to spare part of her produce to help those who are extremely food insecure. On average Linah harvests 10, 90 kg bags of maize.

“The little food I get from my farm is able to cushion me from the severe effects of the drought and I am able to feed my family for two months and also support those with no food at all,” Linah says.

Linah is eager to enjoy the fruits of her hard labour and will also stash some bags away in the community grain storage where the produce is safely stored for possible contingencies.

She worries so much for residents who have no source of livelihood and gladly assists those without food.

The children in the scheme are healthy, energetic and wear happy faces - a clear indication of a healthy, food secure community.

Eleven-year-old Loice Akaran is very lucky, unlike other children in parts of Turkana, she looks strong and healthy. “We eat everyday and we never go hungry, I am able to concentrate in school,” Loice says. The scheme sustains her family.

Chairman of the irrigation scheme Philip Esinyen explains that residents of Morulem have not relied on relief food aid since 1996 unlike other parts of the region where relief food is the norm.

Philip owes the success of the scheme to the strong management structures that were put in place by World Vision back in 2001 before the project was handed over to the community.

“We are very blessed as beneficiaries of Morulem. The crops in the scheme are like manna from heaven, unlike other parts of the region we have not experienced severe hunger and the community is food secure,” Philip explains.

Due to its success, Morulem has experienced a sudden influx of people migrating from highly food stressed regions of Lokwii, Suguta and Kalapata (in Turkana East) to Morulem where food is easily available.

“But if such a project can be replicated in other parts of Turkana, then we will never again have to grapple with issues of food insecurity,” Philip says. Philip also urges partners to invest in technology, saying it will transform the community.

Eyonga and Eshokon had to shun their pastoralist lifestyle and get accustomed to agriculture after all their livestock was stolen by raiders from the neighbouring district.

“We lost everything, we were crippled but luckily we had our farms in the scheme,” explains Eyonga. Ever since this project has become their source of livelihood and through the farm Eyonga has been able to put all his children through school.

“When my children are sent home for school fees, I am able to sell part of the produce and get them back to school,” says Eyonga. The scheme has helped this community to cope with the hunger and drought situation, he says.

Eyonga has had his farm since 1992 when World Vision took over the project from the African Inland Church (AIC), the pioneers of the irrigation scheme.

Despite the success of the scheme, there is one major setback that faces all the farmers and if this can be addressed the farmers say they will be food secure throughout the year.

“Most of us have large families and the produce from half an acre piece of land sometimes is very little. But if the scheme can be expanded then we can have sufficient food,” Eyonga explains.

World Vision Kenya Branch Director Daniel Mwebi once Manager and Engineer of the scheme lauds the farmers in Morulem for owning the project right from the start.

“World Vision built the capacity of the farmers through trainings and adult literacy and they were able to apply what they learnt in theory, practically in their farms hence they have been very successful,” explains Mwebi.

Through the Morulem scheme World Vision has been able to build community resilience and continues to support the farmers through trainings.

World Vision also continues to be identified with Morulem Irrigation Scheme (MIS) as it is part of the oversight committee together with the government and other partners.