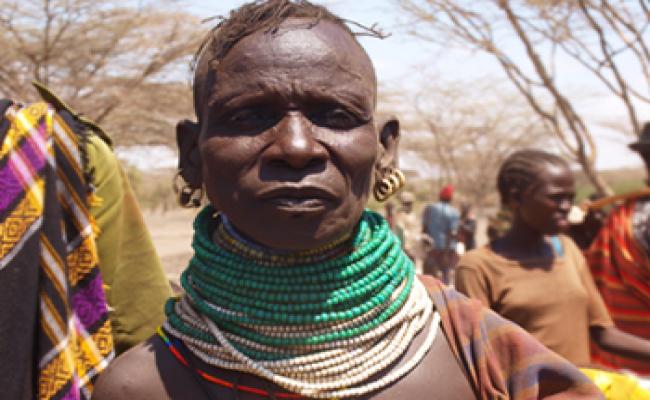 I have always believed that having to bury a son or daughter is the most traumatic thing that can happen to a mother, a violation of the natural order of life. But if, on top of this, your child dies because you cannot feed him, then your pain is compounded by the impotence of not being able to respond to the most basic maternal instinct: to nourish your children.

That’s why, when Namanakwee Ngamor tells me that less than a month ago her son died of hunger, her despondent eyes express more than pain. “My son was five years old. He was getting weaker and weaker, and I didn’t have anything to give him except wild fruit. We had gone for weeks without eating, and my son couldn’t survive that,” the woman explains as she holds an empty sack, which she will use to collect her portion of the food being distributed by Oxfam today in Kanukurdio.

This small village in the North of Kenya is just one of the many that have been affected by the serious food crisis in the Horn of Africa, which threatens more than 15 million people in the region.

Hunger bides its time, hovering over the weakest ones, putting the children and the old to sleep first, but its ravages are starting to affect the adults as well. The mothers, with their bodies already fragile from years of adversity, are growing weaker by the day, and they too could succumb at any moment. Mary Nsaniana recently buried her daughter, the mother of her grandchildren, after an illness which, according to the experience of this 50-year-old woman, was due to the accumulated effects of hunger and thirst. Hunger and thirst violate the natural order of life.

The local inhabitants don’t understand why there is a drought, why it hasn’t rained for over five years, or how they’re going to be able to carry on when they’ve just lost around 60% of their livestock. Their goats, their sheep, their cattle, and now even their camels are vanishing, and with them, their only source of income. “When the animals die, we know that we humans will be the next ones to go,” Mary explains with an expression that shows her anger and her desperation.

Desperation and a determination to keep others from dying. “We need grain so we can make pap to give our children before it’s too late,” exclaims Aite Eknba, while trying to prop up her children, Apúa and Evei, whose little bodies are bending under the crushing weight of hunger. After three weeks of eating nothing but edapal, one of the wild fruits that grow in the region, the children are so weak that they can no longer digest solid foods. If their mother doesn’t find something suitable for them to eat soon, another violation of the natural order of life will threaten Nakinmet, a village where more than 4,400 people depend totally on humanitarian aid.

This community has already buried four children who fell victim to hunger, and another 626 are suffering from malnutrition. What cannot be measured is the degree of impotence felt by these mothers, who are forced to wait for the humanitarian aid that will enable them to feed their children for a few more days.

Aite, Mary, and Namanakwee are only three mothers out of thousands of affected women in the region who have nothing to eat and nothing to feed their children. Their husbands, who were once proud migratory herdsmen, can now only wait for the rain they so desperately need.

The lack of pasture and the ethnic conflict affecting some of their former grazing areas in the border regions, has put these communities under a virtual state of siege, forcing them to continue with this dramatic wait.

Nevertheless, for some of these mothers, the wait has provided an opportunity to seize the initiative. In Mila Matatu, another village in the area, I am talking with Alice Atabo, the exchange agent designated by Oxfam to support the food distribution. This enterprising woman has overseen the growth of a small food shop that helps provide for the community’s food needs.

“It all began when I decided to invest a small amount, which Oxfam had given me when I participated in a cash-for-work project, to buy products like milk, flour, and sugar. As soon as people found out they could buy their basic food supplies in my shop, they started coming from all around. And over time, I’ve been able to go back and ask for more credit and increase my supplies. Now, in addition to that, I receive food for free distribution, and the most needy families come to pick it up at my shop,” Alice explains.

“Today, the food has arrived from the distribution center, and the people are already impatiently waiting with their food vouchers ready, because they’ve already run out of food,” she explains while holding the youngest of her eight children, a smiling baby who plays with his mother’s necklaces.

Alice knows she’s a lucky mother as she has enough food to feed her children well.