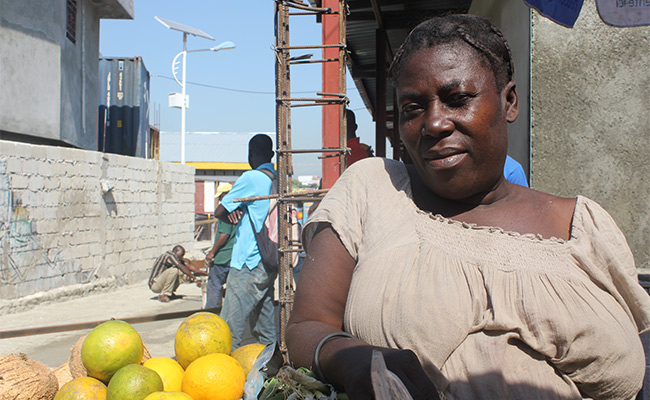 Josette Dorleans, 56, is a well-known trader in her neighbourhood in Delmas 19, Port-au-Prince, where she sells food at the crossroads of Rue Brenord Prophete and the entrance to Cité 4.

Early each morning she arranges her stock on the shelves. Her pitch is only five minutes from her house, so she can easily go back to help her younger children get ready for school. Her eldest daughter, who is 23, supervises the business while she’s gone.

Josette said: “I’ve been selling food on makeshift shelves in the street for more than 15 years. But these conditions make business difficult.”

“In 2009, the municipality of Delmas saw that trading on the main road caused difficulties for the traffic,” Josette said. “They gave us free land for a public market, but when the earthquake happened, people came and put their tents on it.
“I spent all my savings in the few days following the tragedy. And because I sold food, I ended up eating my stock with my family and other people in the zone, there was no other option.”

When the British Red Cross began a cash grants programme in Delmas 19, Josette received US$625 in two instalments. The money allowed her to meet her basic needs and start her business again, helping her provide for her seven children.

Since the market place had become a makeshift camp for people who lost their homes in the earthquake, Josette had to go back to selling on the road. This is particularly difficult in the rain and mud, which is also bad for business.

“Selling on the road is very difficult and dangerous,” Josette said. “You never know when an accident can happen. I remember a car hitting a road seller. Thank God, she only broke her leg, the poor woman. But this is one of the risks.

“Sometimes people are disrespectful towards traders because we take up room on the road. We always have to move our stuff when cars are forcing their way in. It’s frustrating.

“Also, people sometimes leave their cars where you normally set up your stall and the only thing you can do is try to find somewhere else or go back home. It’s very difficult, when the sun’s beating down; there are no trees, no shade. It’s dreadful.”

In July 2012, the British Red Cross began an urban regeneration project, working with a community of 4,000 people in Delmas 19. The community was invited to select representatives – including younger and older people, women and disabled, and reflecting the diversity of the community – to form a committee.

Together, the British Red Cross and the committee developed a programme according to the community’s priorities, which are about improving community infrastructure, as well as people’s homes and livelihoods. Throughout the programme, the committee is consulted and involved in making decisions about the work.

In December 2012, when construction of a new market was completed, providing an improved place of business for 33 individual sellers, Josette said: “It is one of the best things the Red Cross has done for us. Even the rainy season can’t stop us selling our products now.

“This is our Christmas gift and it is a good step for the development of our neighbourhood. We already have a name for the market. We will call it British Market.”

A new market place, built by the Red Cross, is one of the best things Josette has seen since an earthquake devastated her neighbourhood. Street trader Josette explains how a Red Cross project has regenerated her community after the 2010 earthquake.

Read more from the British Red Cross about their work in Haiti.