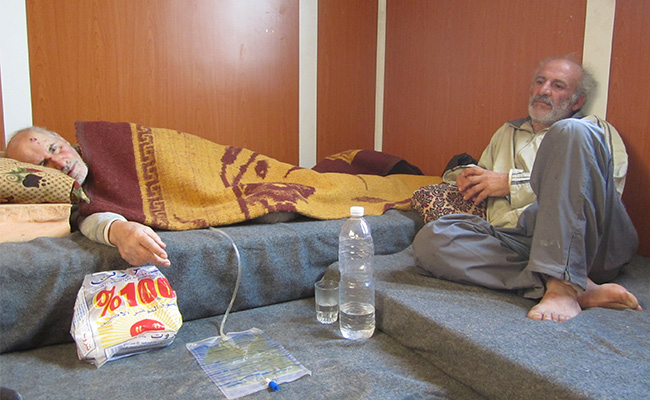 Many of the older people I met in Jordan were visibly affected by the consequences of the conflict in Syria and their displacement.

They openly wept as they told me their stories and described what it's like for them to live in such difficult conditions as refugees.

Most of these older refugees were displaced inside Syria many months before they crossed the border into Jordan. They tried to stay as long as possible inside Syria, aware of the hardships faced by refugees in Jordan. Many wanted to remain in Syria to access medical treatment. However, as health facilities became degraded, that access to medical care was no longer guaranteed.

They had decided to cross the border when the situation had become unbearable, with the destruction of healthcare services in Syria. But because they had remained so long without proper healthcare, many arrived in the refugee camps with worsening medical conditions.

The vast majority of older people who fled to Jordan came with their families. They would usually arrive by car about three miles from the border, then cross the border by foot. Some were injured during the crossing. Those with disabilities and poor mobility were helped by family members and others.  Some had to be transported on a stretcher to cross the border.

Hazards ahead for new arrivals

Older people face hazards as soon as they get to the main Zaatari refugee camp. New arrivals have to cross 50 metres of stony, sandy ground that is poorly lit. They risk falling and injuring themselves on a path that is unsafe and inaccessible. There is no other option - even for those with poor mobility - if they want to be registered at the camp. There is no-one to provide assistance or to ensure they make it safely to the registration area.

Once they do get to the registration area, they find many people waiting here for the new arrivals. Often these people will take advantage of their confusion and lack of information, abusing and extorting the more vulnerable.

Cash is a dire need

The new arrivals said that they were living on their savings. Without any outside help, most households are unable to cope for longer than a couple of months. The older refugees and disabled people I met were not working.

Many told me they had sold jewellery to raise cash, or were selling their emergency rations or borrowing money from relatives or acquaintances in Jordan. Only one 56 year-old-man I met received a pension in Syria. His relatives back home were withdrawing this for him each month from his bank and sending the money on to him.

The main refugee camp in the north of Jordan, Zaatari camp, hosts more than 144,000 refugees and residents live in overcrowded conditions. Despite feeling physically safe and secure in the camp, everyone I spoke to was worried about the lack of electricity and water in the camp.

One 60-year-old woman living with her husband, daughters and grandchildren feels anxious at night because there is no light. She does not know what is going on around her but hears all the noises and people around fires that surround her shelter.

"I won't queue for food I cannot chew"

For the older people in the camp, the twice-monthly food distribution is the main source of food. However, everyone buys fresh food at the market in the camp - especially vegetables.

One 69-year-old man, Mahubd (picture above on the left with Hashim), living with his son, Hashim, was not registered to receive the distribution.

This meant he could not get food rations in the camp. He did not want to queue for hours for two kilos of rice which he was unable to chew since a stroke he suffered a few years ago.

Older women said the bathroom facilities were their main concern: They are not accessible and the lack of doors means they feel vulnerable when using the toilet.

Older men said the inadequacy of healthcare was their main concern and both groups highlighted the lack of mobility aids.

The lack of accessibility to services leaves many older people and people with disabilities feeling isolated and unassisted. The vast majority of Syrian refugees have to get their information from other refugees in Jordan. There is also a special information telephone line but it is engaged most of the time due to the large number of calls.

All the older refugees reported chronic diseases as a major health issue. Lack of mobility was another one, especially since many were injured in the conflict or on their journey as they fled Syria.

Although registered refugees in Jordan can get free healthcare, medical assistance for chronic, severe and long term diseases - which particularly affect older people - is rarely available.

Older refugees in the camp reported better access to health facilities than those in the cities and towns. This is because most urban refugees are not yet registered.

What we are doing to help

With the DEC money, we plan to strengthen our assistance to older, disabled and other vulnerable refugees living in the urban areas of Jordan and Lebanon. We will work closely with other aid agencies to help them to reach particularly vulnerable people.

We will help them to provide the right kind of relief and services for the particular needs of older people and the disabled, and to make sure the assistance is accessible for people with only limited strength and mobility. We will also be identifying the most frail, isolated and vulnerable older or disabled people and providing them with direct assistance so they have the basic essentials of a roof over their heads, food, clothing and medical care.