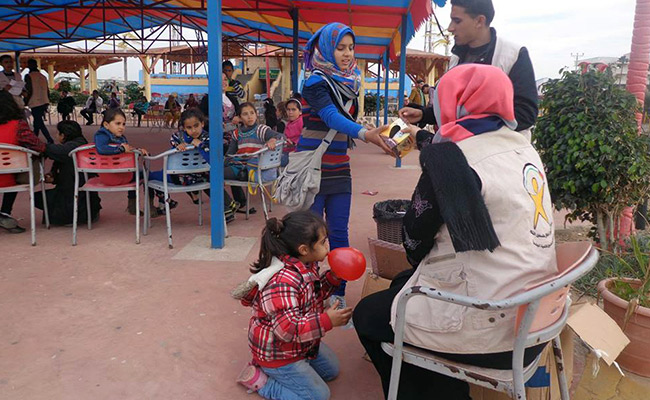 Rima receives a gift after winning in an activity at the Child Friendly Space.

Rima lost her 20-year-old brother and three year-old sister in the recent conflict when a bomb hit the front door of their house. “I ask myself every day, ‘why?’ Why were they killed? What did they do, and I cannot find an answer,” she says. “Wars are horrible, I just pray that no one would live the same way or experience a war,” Rima continues.

The war forced thousands of residents to flee from Rima’s neighbourhood in North Gaza. “We just left. There was no choice but to leave,” says her father. “It became like a ghost town. All I thought of was my family and that I needed to protect them.”

The loss of her brother and sister together was more than Rima could handle or even begin to comprehend. It was especially hard to accept once they returned home after the violence stopped.

“I hated my room because it reminded me of my sister,” Rima says sadly. “I hated the kitchen table because I used to sit next to my brother. I even started to hate my home and everything that reminds me of them, because I could not understand why they were killed,” she adds.

Her friends’ return home helped Rima begin to recover from the loss of her brother and sister. “I just ran and started hugging them all, I missed them a lot,” she says. Rima’s healing really began, however, when World Vision’s local Child Friendly Space (originally opened after the November 2012 conflict) was re-opened. “The day the centre was reopened was the day that my heart opened again,” Rima says.

Rima had been a regular participant in the Child Friendly Space’s counselling activities. After the conflict in 2012, she became a regular member of the singing group. “She has a lovely voice, full of passion, and strong; she loves singing and enjoys it a lot,” says Nihad, the singing teacher.

When Rima and her friends rejoined the activities at the Child Friendly Space, she took part in a series of debriefing sessions and was encouraged to join the theatre group. Acting gave her another way to work through all that she had been through. “I always loved singing,” Rima explains. “But, when I started with the theatre group, I was able to speak loud, say what I wanted, be part of a group, and show my feelings. I needed this and I feel relaxed after every play,” she adds.

“I want to show other children that they have the power to overcome all the darkness and the hardness of this war. We have a heart full of love and faith and we can show this. I know that despite the loss of my brother and sister, I was blessed that I have a family here. My friends and teachers at the Child Friendly Space are my extended family where I feel much love and safety,” Rima declares.

To date, Rima has participated in ten plays in the Child Friendly Space, performing for other children. “I believe in what I do,” she says. “I feel happy when I act in a play because I express what I want to say, and I know that there is a child, a friend, a brother who will learn something from what I do,” she smiles.

A total of 40 Child Friendly Spaces were opened as part of World Vision’s initial emergency response to address the urgent needs children in Gaza are facing. To date, approximately 4,000 children have received psychological first aid and trauma counselling.

World Vision continues to work through its programmes to impact the lives of over 200,000 children in 117 communities. World Vision works throughout the occupied Palestinian territories to improve the livelihoods of families and children and ensure that all children are cared for and protected for a brighter future.