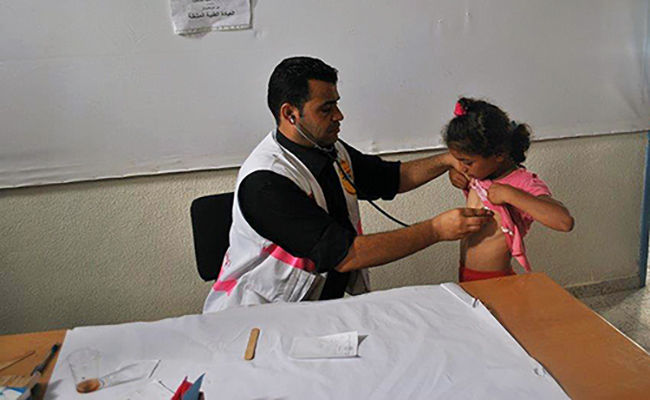 Dr. Ghassan Qaraman (41) is a paediatrician and father of five working for the Palestinian Medical Relief Society (PMRS) in Gaza.

In partnership with CARE, PMRS is providing medical assistance through mobile health teams. They set up mobile clinics in schools and other places where people are finding shelter when forced to flee their homes. In a day, the health teams see an average of 300 patients.

When Dr. Qaraman leaves his home and family in the morning, he has conflicting feelings of worry and an obligation to help.

"I am usually worried about how I will get to work.  Will the road be safe? I need to get to the people so I can help them, but at the same time I am worried for my safety and the safety of the team. The situation is very bad" he says.

Where the teams go is decided the night before in coordination with the UN – though the site might be changed at short notice depending on the needs and the security situation. Usually it is a school turned into a shelter for hundreds or even thousands of people who have lost their homes or are afraid to stay in them. It quickly gets crowded outside the provisional clinic.

"People see us and they come because they are in so much need for medical care" Dr. Qaraman says.

Each team consists of eight medical staff:  Two general practitioner doctors, one women's health doctor, one psychosocial worker, three community health workers or nurses and one physiotherapist. They receive patients with a wide variety of injuries and ailments, some caused by the war, others made worse by it.

"We have seen increased numbers of children with skin problems, which are a result of shortage of water. There are also respiratory infections and eye infections, which have increased as a result of dust caused by the bombing" Dr. Qaraman explains.

"We have also seen a lot of children with bed wetting problems because of mental traumas."

The teams work from eight o'clock in the morning until seven in the evening.

"Today I saw 115 patients, but we still have to go back tomorrow in order to see everybody who needs medical attention. Some cases I have to refer to the hospital because we do not have the medicines needed or they require more thorough examination. Today, I referred one patient with meningitis. Others cases include high-risk pregnancies, uncontrolled diabetes or hypertension."

In a typical workday, the teams face many challenges.

"Some of the problems are due to a lack of resources, especially in terms of medications. Other problems are caused by the uncertain situation and the continued bombardment" the doctor explains.

How do you feel after a long day's work at the clinic?

"I feel sad for the conditions people have to endure. I am happy that I can provide some services to my people, especially children, who seem to be the most affected."

Sadly, there are some patients he cannot provide with the help he would have wanted.

"There are so many stories we encounter as part of our work. One of the sad stories that I had to deal with is the story of ten year old Nour. Nour is a very small girl. She does not look her age. She suffers from brain cancer, at a very advanced stage. She can no longer see and she is paralyzed from the waist down. She lies on a mattress in a corner of a classroom with only the medical care we can offer. There have been numerous attempts to get Nour to travel for treatment abroad, but her case is nearly terminal and no hospital is willing to admit her in this situation."

The general feeling in Gaza is not optimistic, according to Dr. Qaraman.

"People are depressed, anxious and there is fear of what is yet to come. People seem like they have lost hope, and they don't even know what to expect any more."