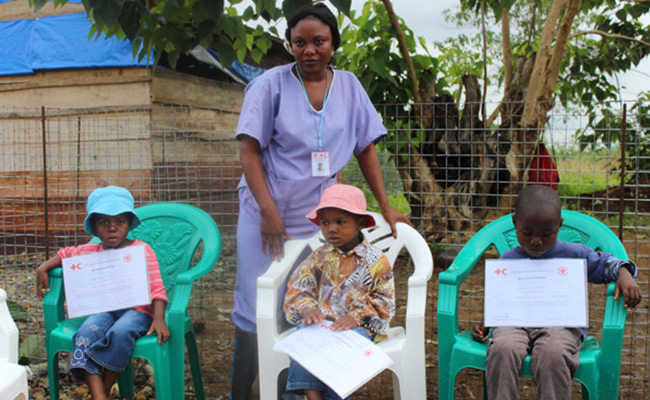 Jestina Boyle with children about to be discharged

Through Jestina’s encouragement and counselling skills, more patients are going through the so-called ‘happy shower’.

This is the shower that survivors experience before crossing the threshold from the treatment centre back into the normal world.

It’s an affirmation that they have survived this vicious virus and are washing away the disease. He or she showers with water that has been chlorinated with a 0.05 per cent solution.

“Often when patients are admitted to the centre with a positive diagnosis, many want to give up. But I don’t let them,” says Jestina.

“I tell them to eat, to drink, to walk around, to do something, just don’t give up.”

Many of the patients have already experienced terrible loss to the disease. In some cases, their entire family has died from Ebola and they are the only person remaining.

Others have been infected while caring for someone and have then unwittingly contaminated their spouse and children. Needless to say, feelings of guilt can be enormous and many patients slide into depression.

Jestina is a lifeline for many in these dark times.

“I give them hope,” she says. “So many thought they were dead and then, by changing their thinking, it helps them survive.”

Ebola is inflicting challenges on the individual, family and community. It places strain on friends and neighbours.

Maintaining links with family or friends is critical in keeping patients motivated. Jestina has a phone which friends or family can call to have an update on their loved one’s health.

“I get a number from the patient to call, so I can facilitate a conversation with those back home,” she explains.

“Although the patients can’t hold the phone because of contamination, I speak to the caller and speak over the fence to the patient. That way we keep the patient laughing and joking. The distance between the patient and their home is smaller.”

Jestina’s counselling is not restricted to the patients. She extends her support to callers over the phone, offering reassurance to them as well.

When patients are about to be discharged, she works with other volunteers to prepare the community for their return.

“We explain to the community that the person no longer has Ebola, they are not dangerous,” says Jestina.

“We work with community leaders to make sure the patients are accepted back and are not stigmatised.”

Stigma is something Jestina has experienced herself. “I have had to move three times in Kenema,” she recalls.

“Once, when my landlord found out that I worked at the centre, he told me to leave that day.

“I tried to explain that I do not handle the patients, but he would not listen. If a patient suffers stigma, I will phone the person who is doing it, to make them understand they shouldn’t.”

Keeping people motivated can carry its own toll in what is a very emotionally charged job.

Jestina is a creative person and uses song and dance to keep her spirits up and boost those around her.

“I sing to keep myself happy,” she says. “It’s what I have to do when I see so many people dying. I see that my work has helped people, more are walking out of this centre Ebola-free.

“Treatment is only part of survival. It makes the body strong but with a weak mind, the person won’t survive.

“Now, when I make the mind strong, the body becomes stronger and people survive.”