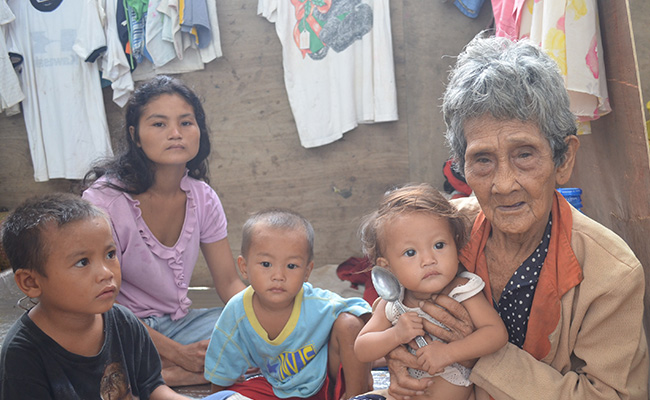 One 99 year old woman who escaped the typhoon is now living in the evacuation centre in Bogo city, in northern Cebu, with her granddaughter and great grandchildren.

Today I visited one of the cities in northern Cebu, Bogo. The area I went to was not much affected by the recent earthquake, but it was badly affected by this latest typhoon. After the typhoon hit, the local government set evacuation areas in each barangay (community) – using schools and sports centres.

The one I visited today was a sports complex, a very sturdy building which could have accommodated all 2,000 people in that community but for the fact that the roof was blown off in the typhoon. Because the roof was destroyed and water is now coming in, the complex can only accommodate about 100 people. About 25% of these one hundred are older people. Some were out for the day when I was there, they are still working, with many selling delicacies in the market in order to earn some sort of livelihood because they have lost everything and have no money.

The population of Bogo is about 90,000. I heard that about 11 people were killed in the typhoon here, but I would estimate that about 80-90% of people were affected by the typhoon because the majority of houses here were destroyed. People told me of one incident when a roof fell in on a house, narrowly missing a child.

I spoke at length to a number of the older people living in the evacuation centre. One woman was 99 years old. “I am living here with my widowed granddaughter and my three great grandchildren. During the typhoon our home was destroyed and we were forced to run. I am deaf but luckily I am strong and healthy and can talk. Our main priority at the moment is food, because there is only a limited supply here in the evacuation centre.”

I spoke to another older couple and the woman was lying on some wood on the floor, but she didn’t feel anything and didn’t talk.  She stays like that all day, seemingly to be in shock from what has happened.

From my visit, I would say that the main need in this area was shelter. People want to rebuild their homes, but they have no money to buy repair materials. They are very concerned that they do not have houses to go to.

The second thing they asked for was food.

And the third thing was to simply get back to a normal life.

One of the big concerns is that there are no other agencies working here – not even the Department of Social Work. There are many people in this area who require assistance.

There is no water supply so people have to buy water – which they cannot do if they have no money.

There are no health services. There is just one privately medical company, whose owner is very rich, which is helping people and has even brought food supplies to help the affected.