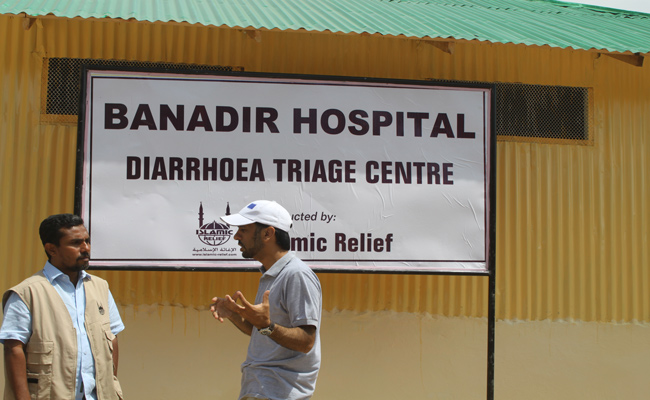 I was a bit apprehensive when I was asked to go back out to Mogadishu. This was because of the magnitude and scale of the disaster that I had witnessed in my previous trip to Somalia just three weeks ago. I have been an aid worker for seventeen years and it still resonates as one of the most distressing and harrowing trips I have ever been on.

I had to prepare myself to re-visit a place that was in severe crisis and had left me with vivid pictures of the suffering that women and children in particular were enduring. I had to psych myself up to go there. After all, the people in East Africa have no means of escape and I couldn’t shake 13 year-old Abdul Illahi – the boy on the brink of starvation that I met on my first visit – out of my mind.

The trip had two purposes. The first was to attend a humanitarian forum meeting, a gathering involving representatives of the Organisation of the Islamic Conference (OIC) – an influential grouping of 56 Muslim states – and aid agencies such as Islamic Relief, the Turkish Red Crescent and UN organisations. The aim of the meeting was to have a better coordinated response from the humanitarian community to the current crisis in East Africa.

The key issue discussed at the event was access. Access in conflict zones is challenging for aid agencies. Islamic Relief and the Turkish Red Crescent have been able to gain and maintain access to local communities in some of the remotest areas of South Central Somalia – the epicentre of this crisis. But both organisations need more support to enable them to gear up their response to help more people.

The scale of the disaster is so huge that speaker after speaker was stressing the importance of getting governments and other donor organisations to commit more funds to the relief effort and prevent the loss of tens of thousands of lives. This was a recurring theme in contributions to the debate from Kiki Gbeho (from UNOCHA), Mark Bowden (the UN’s Somalia co-ordinator) and Dr Hany El Banna chair of the Humanitarian Forum. The conflict in Somalia has been unabated since 1991. It shows no signs of being resolved, and it is making it difficult for aid agencies to get through and provide assistance to those who urgently require it.

Mark Bowden said we have to remain impartial as an aid community and we have to be pragmatic and realistic about the task in hand. We need to understand the gravity of the situation, with 12.4 million people now in need of aid and 3.7 million in Somalia alone.

The job at hand is not impossible. Everyone around the table was stressing that we must find a way to navigate our way around the political landscape. Whether that means using Unicef, the Turkish Red Crescent or Islamic Relief to channel aid, we should not let politics or a troubled political backdrop slip agencies stand in the way of that aid getting through.

The second objective of the trip was to see the progress Islamic Relief has made one month after the launch of the Disasters Emergency Committee’s East Africa Crisis Appeal.

The last time I visited Mogadishu I had experienced the most harrowing and distressing scenes.

Abdul Illahi symbolised for me exactly what we are dealing with. As I said in my previous blog, when I left Mogadishu I left Abdul Illahi in hospital. He was always on mind during all of my interviews. When I was asked how he was I wasn’t able to answer as I was unaware of what had happened to him. Our teams had been trying to locate Abdul Illahi but during a crisis it is very easy to lose contact with someone.

The aid community is often accused of doing too much analysis and conducting too many ‘needs assessments’ before taking action. People see us as arriving with our clipboards and gathering information on our pads to see what is going on. Those affected are all too willing to provide us with the information as they reach out to anyone with the hope that their plight will be known and that the help they so urgently require will be supplied.

The same thought of Abdul Illahi that lingered prior to my trip was constantly with me. I desperately wanted to know what had happened to him. Was he alive? Did we manage to intervene at the right time? I went from Mogadishu airport to the Korsan camp where we were greeted with a wave of people – largely women and children barely dressed. To my absolute delight I was eventually informed of some great news – news that sends shivers down my spine as I write about it. Our teams had managed to locate Abdul Illahi and what’s more he was alive!

During my trip I noted that some of the camps I visited were in better condition than others. The camps are set up in a makeshift manner. There are up to 1,000 Somali people arriving daily into these makeshift camps and they are becoming seriously overcrowded.

What people are living in is a kind of ‘tent’ but it is misleading to call them this. They are pitiful, ramshackle temporary shelters, put together with wood, rucksacks and any other material that people can lay their hands on.

I started to approach a tent which was made from a full white sheet instead of scraps of material. I was told this was Abdul Illahi’s tent. As I approached I could feel my heart beating faster and faster. I pulled the withered material of the tent to the side and was filled with a sense of over whelming joy to see Abdul Illahi lying on the floor with his mother towering over him. As she saw me her face lit up and I was greeted by a friendly smile. Although we weren’t able to communicate with each with words, her eyes and smile conveyed to me a million times more than any word possibly could. When I first met her, she had walked 320 kilometres in desperation for some sort of salvation. Her children were dying and they had nowhere to stay. Now at least she has a shelter, but most crucially of all her son is still alive and his condition has improved somewhat.

In situations like this many assessment teams come and go. I was fortunate enough not only to be able to confirm that Islamic Relief had helped save the life of a child but also to come face to face with him once again.

After Abdul Illahi was fed via an IV drip at the hospital, he regained the ability to hold down food. He is moving around more and seems to be on the road to recovery. A rare moment of happiness amid the crisis that has already claimed the lives of thousands of people. As I walked away from the camp both Abdul Illahi and his mother provided me with a renewed sense of hope.

I then visited the Benadir hospital where Abdul Illahi was taken a few weeks back. To my surprise I saw new beds, mosquito nets, as well as doctors from Egypt, Sudan, Turkey, and the Emirates. These willing reinforcements were all from the Muslim and Arab world. It was gratifying to see that the OIC had organised so much in the health sector, an area that Islamic Relief was leading on.

On my first visit the hospital had only two doctors and ten volunteer nurses. There were no IV units, gloves or masks. Now, however, it is starting to resemble a hospital instead of a highly unhygienic place of little hope that could only delay the death of children and not save them. It was heart-warming to see the changes that occurred in just three weeks.

There is still more work that needs to be done. A lot of children in the wards are still sharing beds.

As we walked in the wards it became very apparent that although resources had increased, so had the number of people urgently requiring treatment.

It is estimated that another child is dying every six minutes in Somalia. Thousands of people don’t stand a chance of survival. If they survive the horrific journey through conflict and drought there are only two hospitals in Mogadishu. There are 400,000 children at risk of starving to death, according to the International Development Secretary Andrew Mitchell.

We have to work unceasingly and intensively to keep these children alive. Many thousands will die if we can’t get assistance to them.

The local staff try to comfort the parents by saying ‘have sabr, have sabr’ – in other words, be patient. But I keep asking myself how much patience are we expecting these parents to have? We have to do all we can to get aid and assistance out to them.

I saw around five or six children sharing the same bed suffering from malnourishment. I asked the doctor if it was dangerous for these children to be in such close proximity. The nurse replied that having the children in hospital also puts them in danger as diseases can spread quite easily.

Islamic Relief built a triage centre after Abdul Illahi was taken into the hospital. He has been suffering with severe diarrhoea and malnourishment, and we wanted to help stop diseases spreading among children as weak as he was. The triage centre is now in its final stages of construction - built in just ten days as a temporary extension to the hospital. I am hoping that this new centre will prevent diseases from spreading.

There is a race against time to see how much we can build up our operation and how many people we can save. We are doing our level best to establish our own mobile team so that we can travel out of Mogadishu and provide treatment to people in Lower Shabel.

Islamic Relief’s strategy is to keep communities close to their homes if we can by providing aid and water in some of the remotest villages so that people can last the next six months until the rains comes. We want people to stay in their respective communities as opposed to putting them into camps. Dadaab refugee camp is about 20years old and has become a permanent fixture, and we are acutely aware that 70% per cent of those who died in the 1992 famine died in camps like this – a grim statistic that we don’t want to see repeated.

Ultimately we want to build resilience in the community so that people can look after themselves and not rely on aid.

I had a mixture of emotions when I saw a huge volume of people flooding into the city to get assistance. It seemed so overwhelming, but we are trying to help as many people as we can. I am very conscious that thousands of people are losing their lives, especially women and children.

Politicians, celebrities, actors and the public need to come together. We are going to require a colossal public effort. The British public have been fantastic and we need their continued generosity so that we don’t let Somalia and its people down.

When I arrived back in the UK I was greeted by the great news that the member states of the OIC had pledged $350 million in new aid for the relief effort. It’s good to see Muslim states mobilising and responding in this way. I believe that in the coming weeks we will see a lot more movement in this area, and I really hope we manage to draw a wide range of donors into increasing their response before it’s too late.