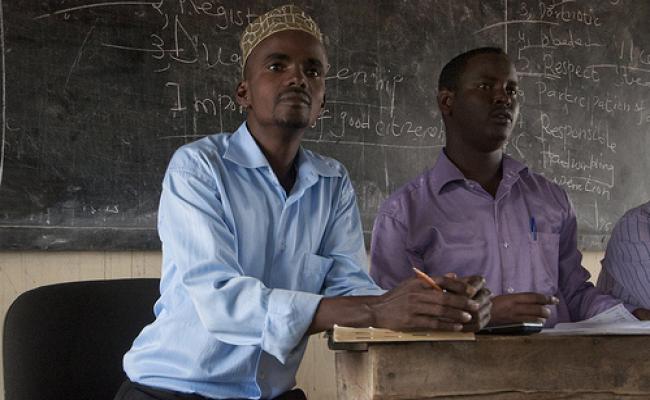 In Hagadera camp, the Lutheran World Federation (a partner of DEC member Christian Aid), a member of the Act Alliance, operates six schools where about 13,000 students are enrolled.

John Kaissa, an educator since 1990, is the LWF’s Education Coordinator. He has managed programs in Kakuma, Kenya and Sudan, but admits the program here is tough.

Fleeing from drought or violence leaves children with a legacy that doesn’t always make them good students says Kaissa.

“They are not used to rules,” he says. “They come to school today, but maybe they don’t come tomorrow.” To prove his point, only the most serious students attended school on the first day of term. It would take the rest of the week for the others to take their place in class.

But even on the first day of term, there were not enough desks to seat everyone.

Mukhtar Osman, the head teacher at Undugu Primary school, which has over 3,000 students, says that their ratio of textbooks per student is one to nine. He says he needs at least 300 more desks for his students, but even if these are supplied his problems will not be over.

Both Kaissa and Osman say that classrooms are too small  for the number of students the school has.

Kaissa is from Lodwar, an arid part of Kenya and says that desert people need education to make the best of their environment.

He is hoping that opening nursery schools for younger children will ease the strain on resources. These are now planned for each block and not only will they leave places at primary school for older students, but they will also give children satisfactory schooling from the start.

Some of the students at Undugu (which means brotherly) are as old as 30, so the competition for a seat at a desk is fierce.

Despite resources to the limits in Dadaab schools, Somali children have a better chance of an education in Kenya than they do in Somalia. The literacy rate in Somalia is 49 percent and only 24 percent for girls, compared to Kenya, where according to UNICEF, 92 percent of adults can read and write.

Yet Somali children like to learn. When asked what they like about school, the first thing that students say is learning. Abdullah is 10 years old and has attended Undugu for three years.

His favourite subject is English, although he also studies mathematics, science, social studies and Kiswahili, the language common to eastern parts of Africa. When he finishes school, he wants to be a teacher, an aspiration that Warsan, one of the many girls who attend Undugu, also has.

Osman says that girl’s enrolment has risen steadily and, if the current trend continues, there will be equal numbers of boys and girls enrolled in schools around Dadaab within the next three years. This is, in part, due to a campaign funded by the World Food Program, which gives sugar tokens to girls who attend 80 percent of classes every month.

One of the happiest students at the school was Abdi, a 12 year old boy with a learning disability.

Abdi’s bright smile makes him stand out in the crowd as students gathered at the morning assembly. He is one of 10 special needs students at the school who are taken care of by three teachers.

Truphena Kirior, the head teacher of this group says that these teachers need specialized training so that they can take proper care of their students. This problem is endemic across the education system in the refugee camps around Dadaab.

Teachers working here are paid less than in other parts of Kenya, but there is a large demand for them. There are at least 1,000 teachers in the LWF program alone.

“Every cent changes somebody’s life. Every cent can give somebody hope,” says Kaissa noting that education in Hagadera is a large and costly program. Education is fundamental to breaking the poverty cycle and, as long as these children are in Kenya, they have a chance that this will happen.

As Kaissa says, “Can you imagine changing somebody’s life?”