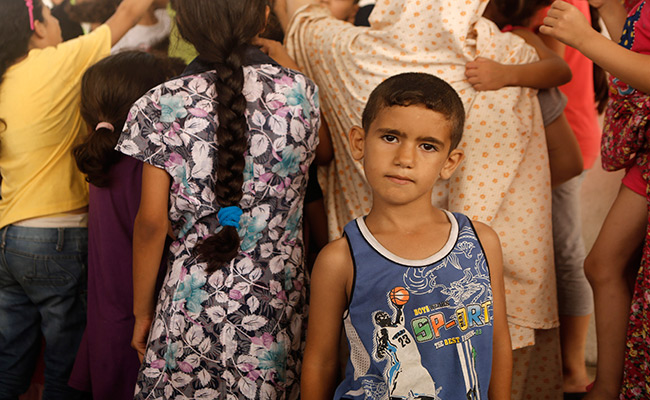 Salama Shamali is just six years old, yet he has already lived through three wars.

I met him just days ago at a school run by a local church, where he and his family sought refuge after their home was bombed. "I am not happy," he told me. "My house is destroyed. The missiles destroyed my bedroom and burned my bed. I loved my bedroom. I want to be in school to study and play with other children - not to live in."

Salama was only seven months old when the first war, Israel's military operation "Cast Lead," began at the end of 2008. During an airstrike, shrapnel and shattered glass injured his hand. It's a miracle he survived, his mother tells me.

In 2012, when Salama was four, the second war, operation "Pillar of Defense," began. The psychological impact of that bombing lasted a long time. "He couldn't sleep for months afterwards," says his mother. "He used to wake up at night and run outside the house, trying to escape the bombing that he imagined was taking place."

This year, when the heavy bombing started, Salama stopped eating and kept saying that he had pain in his chest. "I was so worried that he would die just from fear," says his mother.

An entire generation of children in Gaza is growing up like Salama - knowing little but airstrikes and destruction. The UN estimates that at least 360,000 children in Gaza will need psychosocial support to try and overcome the trauma.

After a month of violence, schools in Gaza are now overflowing with hundreds of thousands of people seeking shelter. Conditions are horrific - they're overcrowded, with bare minimum food and water, and people are terrified. Schools have been bombed even as families shelter there.

Oxfam and our local partners are delivering safe water to the school where Salama's family is now sheltering, but it is a struggle to meet the huge needs. Water systems have been damaged by the bombing and Gaza's only power plant was destroyed, knocking out the electricity that keeps water pumps working.

When I picture Salama, I think also of my own nieces and nephews, and my friends' children. They have all been through more than any six year olds should have to.

We owe it to future generations of children in Gaza to make sure that this latest war is the last.