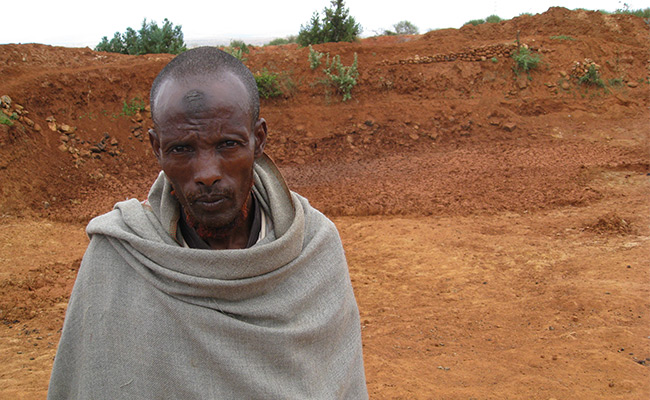 DEC member Age International is supporting older people in southern Ethiopia affected by the 2011 drought with cash payments to help them recover and rebuild their lives. The project  has been funded by the DEC East Africa Crisis Appeal and led to the building of water capture ponds as a resource for the community while providing paid work for for family members of local elders.

The 2011 drought led to the death of many livestock and crop failures which caused a food crisis for many people in the Borena Zone of southern Ethiopia. When a situation gets this bad older people are often particularly vulnerable, especially those without a wider family network who can support them in tougher times.

In the first part of the project, older people who didn’t have children over 18 who could help support them were given a payment equivalent to700 birr a month (Ethiopian currency, worth roughly £25). The initial plan had been to pay the full amount in cash but upon consultation with the community local people requested the payments be in the form of 50kg of maize, 5kg of haricot beans and 200 birr (approx. £7) in cash, which was mostly used to buy supplementary food items including sugar, tea and vegetable oil. This was DEC funded work which supports 996 older people with a monthly payment.

The second part of the project was a cash for work programme reaching 923 older people who have children over the age of 18 who could undertake paid work on their behalf. The young adults received training and new skills to help them rehabilitate six water storage ponds which were needed to help both local people and their cattle survive the dry seasons. Older people remained central to this project as they helped oversee the work and resolve any work related disagreement that arose. This work was paid for with the same package of 200 birr and 500 birr in food items as decided by the community.

Shukri Chellei, 56 years, was one of the elders who led the construction of the pond in Didmega village, just outside the town of Mega in southern Ethiopia. Speaking to the DEC he said:

“The aid we have received has helped us a lot, it has saved our lives.  If this aid had not been given we would have had to sell our livestock and we would have no future.  It also allowed us to keep our ability to move around to find pasture for our cattle.”

This life enhancing work by Age International means that the community is better placed to cope with future tough time resulting from poor rains. The work in East Africa is funded directly from the donations DEC supporters gave to the appeal in 2011/12 and the money will continue to be spent over the next year improving lives of some of the people affected by drought.