Here DEC CEO Saleh Saeed shares the first of his day by day experiences of his visit, during which he talked directly with families who have fled the conflict in Syria with little or no money and possessions. With rapidly dwindling resources, a bitterly cold winter and poor shelter their stories are just a handful from the many thousands of Syrian refugees who are now facing a catastrophic emergency.

Today 1,763 Syrian refugees fled the escalating conflict in Syria into neighbouring Jordan. A similar number cross every day and most have little more than the clothes on their backs. 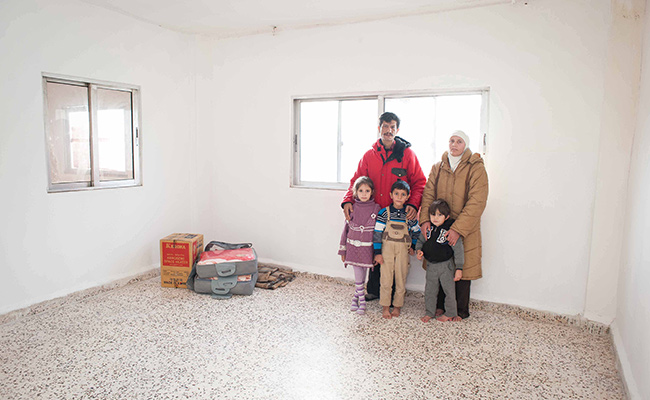 Jordanians are hospitable hosts and good neighbours; they have been supporting the refugees to find shelter, food and emergency healthcare. When the Arab Spring reached Syria two years ago, many Jordanians welcomed refugees into their own homes, thinking that they would be there for one maybe two months. They never expected the refugees to stay for two years and for there to be no end in sight. Now resources are running low and tensions are beginning to show.

DEC member agency Tearfund is working through its partners Medair and the Jordanian Health Aid Society (JHAS) to reach the most vulnerable refugees - many of whom find themselves with no family or friends in Jordan and out on the streets with nowhere to go.

We visited Al-Zarqa, one of the poorest towns in Jordan, here we met Jalil (pictured left with family), his wife Adila and their three young children Mohammed aged four, Talib aged five and Basmah aged six. Their home was destroyed in the fighting in Damascus, they fled in a hurry with no possessions, no money and everything they had worked for was destroyed.

Jalil told us, "The children are so traumatised they shake with fear when they hear planes overhead even in the safety of Jordan. We lost everything - our home, my job, our income. We managed to take with us only the children's school certificates."

Jalil’s family can be considered one of the lucky ones as they made it to the safety of Al Zarqa in Jordan - but they left us with no doubt about the concerns they have for friends and family who remain under stress and in danger in Syria.

"Our friends in Syria have no electricity and no bread and we pray for their safety." Jalil told us. 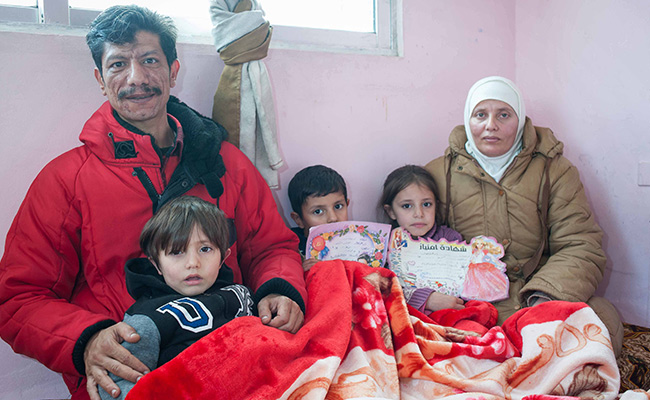 Zaatari refugee camp has been the main location for the thousands of Syrian refugees crossing into Jordan. When we visited there were over 70,000 registered refugees at the site. Over 120,000 people had been registered there but many find the conditions so unbearable they leave looking for somewhere else to stay. Some come back after realising that it is worse on the streets and that they have no other choice.

Since the crisis began Zaatari camp has become a sprawling city of tents neatly laid out by UN refugee agency. Sadly even the winterised tents they have been given offer little protection from the bone chilling winter. Overstretched health centres have to deal with the consequences of the combined effect of the trauma, cold and inadequate food on the residents of Zaatari. DEC member agencies Oxfam and Save the Children are already providing essential support such as the provision of water and sanitation, and safe play areas for children. Tearfund partners Medair and JHAS supply critical medicines and health services through their clinic in the camp.

Security is a real issue, particularly at night; people are so desperate that things do go missing. But there are also organised criminals taking advantage of the refugees’ plight - there are no police in the camps - only those on the perimeter who stop people from leaving.

We headed back to the Jordanian capital Amman, leaving the sprawling Zaatari refugee camp in the distance behind us but we took with us heart breaking memories of suffering, trauma and anguish.

The second leg of the journey in Jordan took us to Mafraq near the Syrian border where we met Abu Mohammed, Nihal and their son Omar aged five (Omar pictured, showing me the direction of the next leg of my trip). 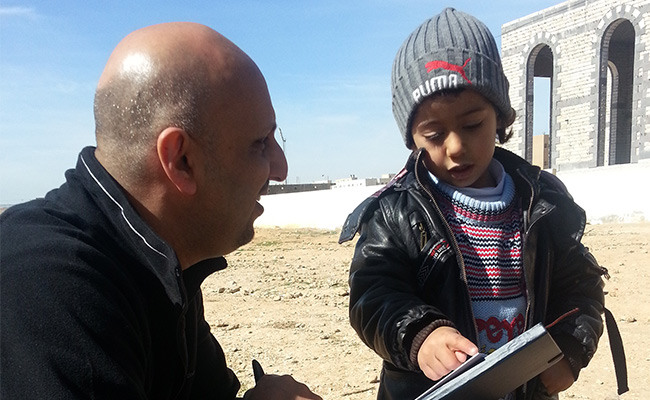 Omar was patiently waiting with his parents at DEC member Islamic Relief 's distribution centre. Each family received food vouchers worth the equivalent of £24 for a four week period. Families are then able to exchange these vouchers for essential food in local markets. Omar's father Abu Mohammed was grateful for the vouchers but explained that whilst he managed to squeeze his family into a friend’s house he slept on the street as there was no more room. "Our most urgent need is to find shelter, everything is so expensive in Jordan and we have no money for rent. We chose not to live in the refugee camps because of the poor security and terrible conditions, when it rains people are knee deep in mud. What we really need is assistance to find somewhere to live, support to pay rent; also our children are missing out on school, I worry about their future." The family also received a winter kit consisting of blankets and warm clothing. We left Jordan that evening and headed to Lebanon where I wondered what further misery we would witness…   Saleh SaeedCEO, Disasters Emergency Committee Read more on Saleh's trip: Syria Crisis: refugees in Lebanon, 1 Syria Crisis: refugees in Lebanon, 2