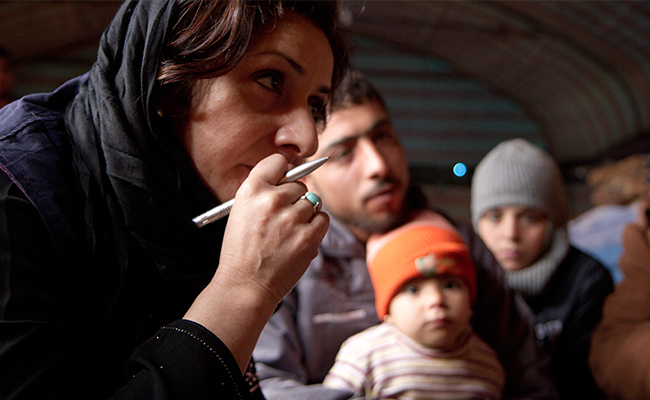 I recently visited Syria with an Islamic Relief field team to assess the plight of the thousands of Syrian families who are being denied entry into neighbouring countries and - as a result - are now languishing in dozens of makeshift camps just inside Syria’s borders.

As an aid worker, I’ve visited many camps of this kind, but what struck me the most about Syria was the lack of any international presence and limited camp management. We were confronted with total chaos and immense human suffering.

There were makeshift tents that were housing large numbers of people in overcrowded conditions. I met one family that was sharing a tent with fifteen other people. Food was in very short supply and there was a lack of medical care and inadequate sanitation. Most of the people I met in the camp had not eaten that day. The freezing conditions meant that most of the children had racking coughs as they tried to withstand the coldest winter Syria has seen in ten years - with damp blankets and hardly any heating.

Families told me they had fled to the borders because of frequent bomb attacks and because their hometowns no longer had even basic supplies of food or water. It was awful to see the stress these families were under – and sickening to see how little help was reaching them. I’ve seen for myself how vital it is for aid agencies to deliver more aid inside Syria.

Islamic Relief encounters difficulties getting aid into the country – a situation that urgently needs to be addressed by the international community. This will only happen with the negotiation of ‘humanitarian corridors’ – specified distribution routes within specific time periods where a limited ceasefire will be guaranteed by both sides in the conflict.

A breakthrough is desperately needed for aid agencies to establish a more significant presence inside Syria and help the hundreds of thousands of Syrians who desperately need humanitarian assistance.