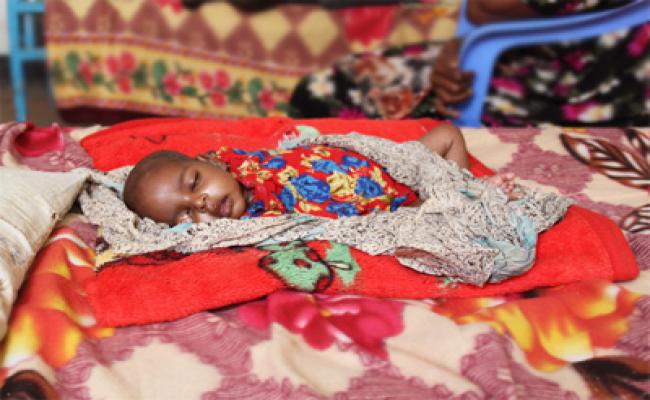 While the famine areas of Somalia have been grabbing the headlines, neighbouring Ethiopia remains in crisis. An estimated 700,000 people are at risk of starvation, with tens of thousands of Somalian’s crossing the border to take refuge.

Merlin is one of the only active NGOs in Gode zone. They are supporting health posts and Gode hospital (with Maternal Child Health and nutrition programmes) while also providing health care for recent new arrivals of refugees into the region.

Three month old Mohammad Amin lies in the therapeutic feeding unit supported by Merlin in Gode hospital. Mohammad looks like a new-born baby – he is so small. His mother, Rahmo, tells us her story.

“There is a big drought this year. In my village, Badeload in Gode, it is mostly farmers. We had 10 cattle. We now only have two. My husband tries to collect firewood to sell. Sometimes we have money to buy food. Sometimes we don’t. This is the worst drought. We try to adapt but we have nothing.”

Baby Mohammad is one of five children. Three of his siblings have already died. Two died when they were just eight months old. The children appear to have died from diarrhoea and vomiting. They were very thin; clearly malnourished.

Rahmo is struggling to breastfeed Mohammad. He is severely malnourished. The hospital staff, with the support of Merlin are trying to keep him alive. He probably needs to stay in the unit for one more month until he reaches his ideal weight.

The nutritionist in the hospital tells us that the cases of severe malnutrition have significantly increased in the last year – probably doubled.

Merlin is working tirelessly across east Africa, helping mothers like Rahmo feed their children and keep them healthy. We can only do this because of the support you give us.