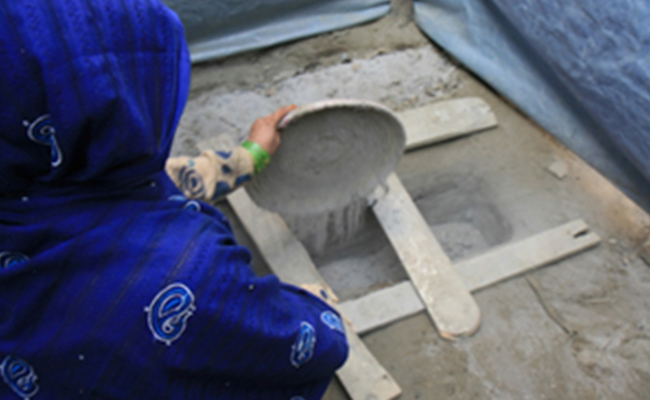 After a disaster, people need toilets from day one to help stop the spread of disease. Mostly these emergency toilets are built in camps but in Pakistan Oxfam worked with communities to build them for people to use near their flood-damaged homes.

Basraja, had only been married for 10 days when the flood came: “All we could do was run…collecting nothing as we left…When we came back everything was covered with mud and debris.” Returning home her family were reduced to going to the toilet in the open.

The agreed solution was to work with each family to build a trench lavatory that would last a family of seven around one month. When each trench is filled it is covered with earth and the family build a new one.

When asked what she thought of the new toilets, Basraja replied: “We’re very happy with these latrines. Before we had these we had to go outside. There was no privacy and men could see us, so we had to go at night.”

Basic maintenance is required, a pile of ash from kitchen fires is kept close to each trench.

“After defecation, you cover the faeces with ash so it doesn’t smell and flies can’t get to it,” explained Pankaj Kumar Singh, Oxfam Public Health Engineer.