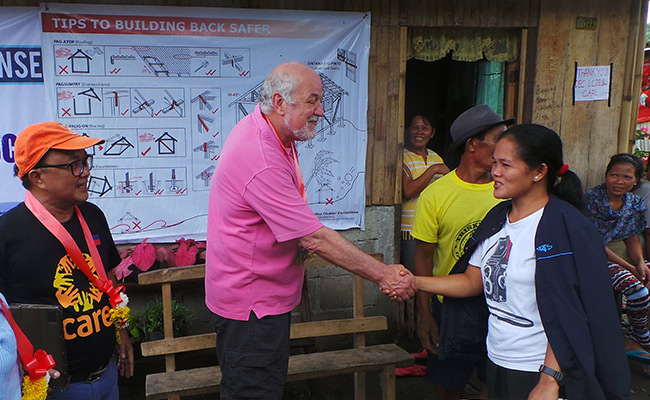 It looked a bit a grim. Overnight rains had swelled the river that swings around the village of Salvacion, just north of Cebu, Philippines  and our driver was not about to risk his precious 4 x 4 to get us through to the CARE housing scheme on the other side.

I was taking off my socks and shoes when help arrived in the form of the local garbage truck. I climbed aboard and we surged through the floodwater.

Welcome to the Philippines in the typhoon season and to the Barangay Salvacion where the villagers survive on farming mixed with recycling the area’s rubbish.

Back in November 2013 every home in Salvacion had been levelled by Typhoon Haiyan as it ripped through eight provinces killing over six thousand people, which many still think a woeful underestimate, and damaging or destroying more than one million homes.

The road to recovery

But Salvacion is back on its feet and everyone of its 63 households had been rebuilt thanks to the DEC member agency CARE. The recycling business is back in full flow and coconut trees (33 million were downed by the typhoon across the Philippines) and other crops are being planted again.

CARE with local partners has provided money, tools, skilled craftsmen, expertise and timber from its share of the £97 million raised by the DEC to get Salvacion back on its feet. Sustainable housing with extra buttresses and supports have been built by the villagers with the CARE team of roving carpenters.

Lives here have begun again. The local people are among the 318,650 in nearly 70,000 homes reached by CARE in the Philippines.

By the time I am ready to depart refreshed by local coconut milk and garlanded with flowers by the villagers the river has subsided and the 4 x 4 gets me through. Now it is on Magaswe in Upland Ormoc. We smash, bang and lurch for nearly two hours across what we would struggle to describe as a treacherous, muddy track let alone a road to get to our next barangay.

High in the mountains, Magaswe is remote. Tiny local horses akin to Shetland ponies are still used alongside motorbikes to get to and from local towns. The villagers are labourers in the local sugar cane fields. Life is tough and challenging. This was another village where every home was destroyed or badly storm damaged. Again the CARE team have worked miracles alongside the local carpenter and the committed self help of the barangay members.

The village is back up and running, the cane fields have been planted and the village school is in full swing. Most of last year’s crop was lost and despite the emergency food aid provided by the 13 DEC agencies in the Philippines there is still a food deficit. It will be seven or eight years before the coconut tress are bearing fruit again and the seeds for the new cash crops, including yam, banana and vegetable are in short supply. So CARE is providing a supplementary feeding programme for the primary school kids at Magaswe.

Better marks are being achieved by every child in the school.

We climb back into the 4 x 4 fortified by rice cakes still warm from the stove of one family who wanted to say thanks to the DEC, CARE and its local partners and lurch back through the mud towards Tacloban.

The city has patched itself up and roared back into urban life again. There are still many buildings to restore, but a lot have been repaired, new homes have been built and commerce is in full swing.

The need for emergency aid is long passed. Oxfam with its enthusiastic team of local staff are concentrating on livelihoods and sustainability. 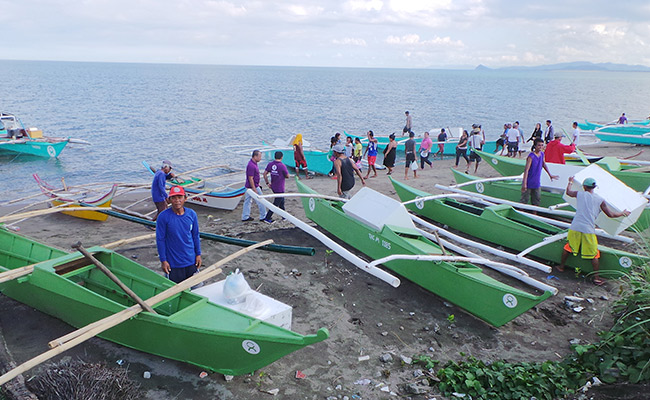 First stop is Barangay Bislid, where Oxfam is nurturing the fishing fleet back into life. New drying facilities for the catch have been created, homes moved away from the shore to a safer environment with land for agriculture and crops to replace the fallen coconut trees.

I meet local mayors, agriculture officials and local partners working in tandem with Oxfam. Then it’s on to a sawmill at Barangay Libertad.

Oxfam backed by DEC funds has purchased 39 chain saws and 13 sawmills (4 electric and 9 mechanical) to begin clearing the broken forests, turn the fallen trees into building timber and there are plans now to set up furniture business.

Local farmers have become leaders of the sawmill cooperatives. Making a living from the timber as they steadily return to farming with new crops and new livestock to tide them over and diversify their income as the newly planted coconut trees rise again.

Then we go down to the sea again to the fibreglass boat building station created by a wonderfully enthusiastic Oxfam Filipino worker called Neil. New boats in the traditional style but in new materials have been built by fishermen and their families that lost everything in the typhoon. New robust boats, easier to repair and with new diesel engines.

Boats cooperatively owned by the fishing families, not just by a few privileged individuals, and boats that come with insurance for the first time and with on-going deals already negotiated through a group purchasing scheme again by the inspirational Neil. 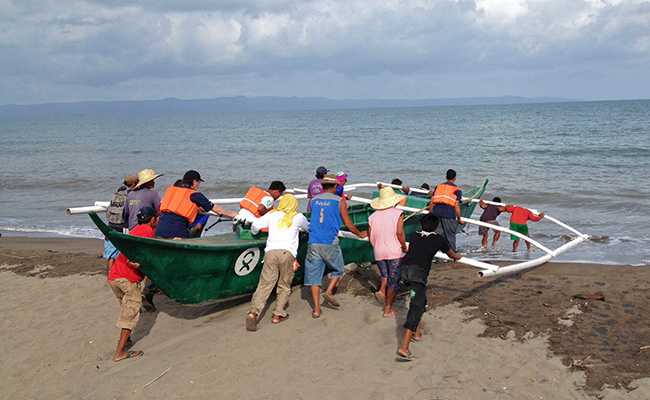 Back in business: fishermen using boats built with DEC donations are able to return to their livelihoods

Small boats manned by men from two or three households, medium boats that can support four to five families and big boats that can travel way out into the surrounding ocean and support up to ten families are launched with great glee or are completed in the specially constructed shed on the shore.

It is impossible not to share the joy of the families as the boats set sail for the first time.

DEC funds raised through the generosity of the UK public, Oxfam expertise and the hard work of local partners ensures that 350 families will benefit from the 70 new boats that have been created.

It is the ultimate co-operative. And an example of the ethos that binds us all at the DEC: Together We’re Stronger.