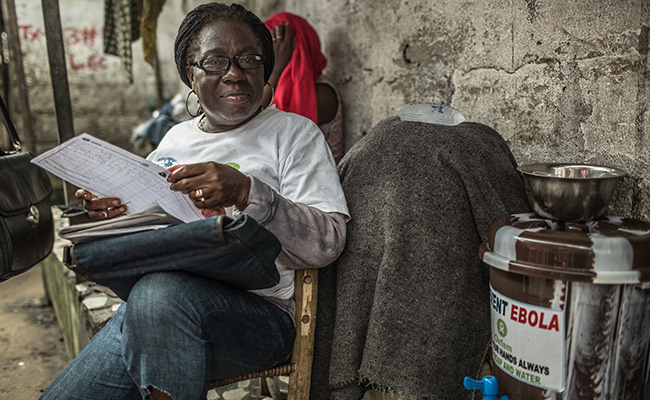 Agnes Nyantie’s unassuming manner hides a spirit that will be key in overcoming Liberia’s Ebola crisis. The 42 year old mother of five goes on her daily door to door round of houses in the insanitary back alleys of West Point to offer people advice on the deadly virus.

Yards away from West Point’s narrow through road, with its bustling street-side markets and shops offering  everything from dark brown smoked fish to dubious looking dentistry, Agnes talks calmly to families about how best to prevent catching Ebola and what to do if they suspect someone has it.

The spectre of Ebola tore through West Point some weeks ago, so much so that the government closed the place down and quarantined 80,000 people inside. The quarantine was supposed to be for 21 days and was met with an angry reaction. West Point is one of Monrovia poorest slums and with nothing coming in or going out people were running out of food and prices were rapidly rising. After 10 days of a stand-off and the shooting of three protestors, the government relented and lifted the quarantine.

Agnes is one of a 100 strong team of Community Health Volunteers who are the first line of defence in the battle against Ebola. She has been a volunteer for three years now. She used to get involved in efforts to deal with violence against women but now six days a week she does Ebola prevention visiting 20 homes a day.

Explaining what this deadly disease is to families in West Point is far from easy. She lifts her hands to her eyes and says “They say they can’t see it. They don’t know how Ebola came. How the sickness can come.”

Her efforts seem to be working though. "Ebola is dropping down and it is not the way it was before," she says and adds that in the past "people felt bad. They can't see Ebola. They don't know how people get it. They want it to go away. Then we rest in peace."

On her Ebola visit forms, which she fills out meticulously, she collects comments from people she has spoken to. The three she had collected this morning read: Ebola is going down. We feel fine now not like before. Want more doctors and medicines.

Regular hand washing is important and outside just about every shop at the market are buckets with a tap for people to wash their hands before entering. In West Point’s overcrowded slum with its pools of stagnant water made worse by recent rains there are hand washing buckets as well. People are using them regularly and Agnes makes sure she reminds them on her daily rounds.

The rate of increase in Ebola cases appears to be slowing down in Liberia. In West Point Agnes says that the sound of ambulances that used to rush through it main street is not so frequent and it is about a month since there has been a case in her neighbourhood.

Time will tell whether the slowdown in the increase of new cases is part of an ongoing trend or just a statistical blip. Whatever the case, it is clear in West Point there is not enough help coming in.

Oxfam has provided 2,000 family hygiene kits in this area which is enough for 14,000 people and though West Point’s energetic Commissioner, Miatta Flowers, is clearly grateful she says her area needs much more. “The material is very little and the demand is high,” she says. She is worried that not having enough for the people of densely packed West Point is creating tension.

As we left, feeling that maybe we had seen signs that this was the beginning of the end for Ebola in West Point we were given a reminder that it is far from over. Heading towards Monrovia a posse of ambulances and pickups passed in front of us. “Dead bodies,” said my Liberian colleagues.