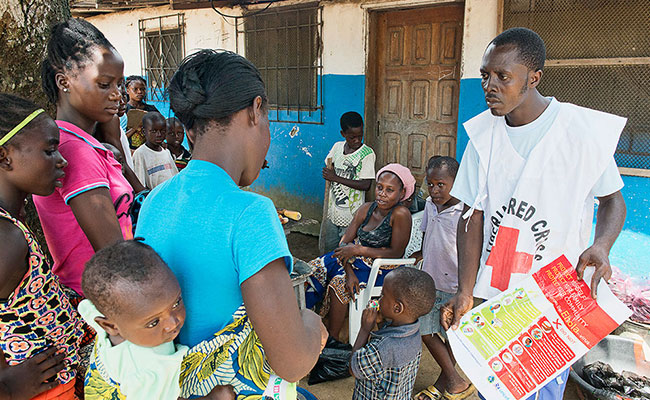 More than 35,000 local volunteers are helping Disasters Emergency Committee (DEC) members to provide support and information to Ebola-affected communities in West Africa to stop the spread of the disease.

Trusted community-based health volunteers supported by aid agencies Oxfam, the British Red Cross, Christian Aid and CARE are going door-to-door in parts of Sierra Leone, Liberia and Guinea to educate families about how the Ebola virus is spread and the importance of early treatment.   Agencies are also supporting a range of other approaches to provide information to communities including working with religious and community leaders, using radio broadcasts and in one case even employing clowns to engage communities and spread Ebola awareness messages.

“It is vital the people of Sierra Leone, Liberia and Guinea know how to protect themselves from Ebola and what to do if they become infected, to break the cycle. Thousands of volunteers now on the ground are playing an essential role in getting these messages out through the communities affected – not just once, but disseminating them over and over, until this terrible outbreak is under control.”

Volunteers come in many different guises; young people who’ve lost family members to Ebola, parents of small children and experienced volunteers who’ve worked in the past on HIV/AIDS awareness campaigns.

Agnes Nyantie, a volunteer supported by Oxfam in Liberia who spends six days a week visiting 20 homes a day to talk with families about Ebola, says:

“People feel bad. They can't see Ebola. They don't know how people get it but they want it to go away.”

There is a lot of fear, denial and stigma attached to the highly contagious disease as it’s the first time it’s appeared in West Africa. Without an extensive network of volunteers it would be impossible to reach tens of thousands of people with information and advice on how they can protect themselves.

The majority of the population in Sierra Leone, Liberia and Guinea can’t read or write, don’t have televisions, don’t have internet access and can’t read newspapers. The only way they get information is via word of mouth, through community leaders or from their radio.

Aid organisations have also employed a range of other tactics to promote good hygiene and safe burial practices, and to encourage communities to respond to Ebola survivors with acceptance, not rejection. CAFOD, Christian Aid and Tearfund, are working with faith leaders and respected elders while Action Aid has used a troupe of clowns to help gain people’s trust and overcome the fear and misinformation that’s been hampering efforts to contain Ebola.

“When we first went into communities to teach them about Ebola, people were running away from us. They were very afraid. There were so many rumours. But the Ebola clowns have made a huge difference in breaking down fear and stigma, especially with children.”

So far almost 5,000 people have been killed by the virus and more than 13,000 have been infected. The World Health Organisation has warned that the number of new cases could reach up to 10,000 a week by December if more isn’t done to prevent the disease spreading.

DEC members Plan International, Christian Aid, Oxfam and Action Aid have helped local radio stations to produce messages, jingles and programming that inform people about Ebola and how to stop the spread of the disease.

Amongst the local volunteers included in the Ebola response so far are: