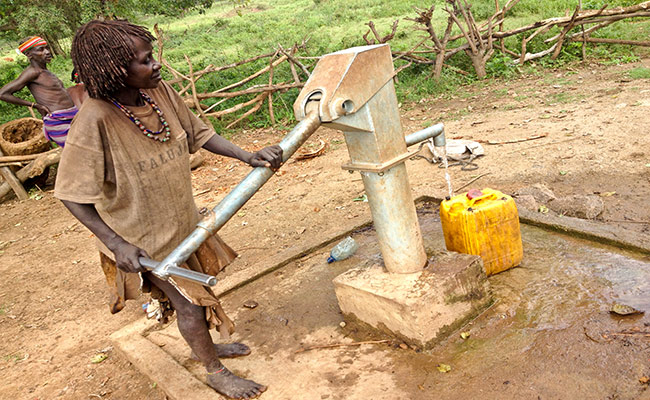 When consecutive rains failed across the Horn of Africa in 2011, drought and hardship came to the people of South Omo, Ethiopia.

“My children and I suffered a lot during last year’s drought,” recalls Haige, mother of three; “I remember there were days which we spent without food and with only a little water to quench our thirst.”

But today Haige has made the short walk down the hill from her village to collect water from a shallow well dug by World Vision in response to the 2011 drought. She has already filled the three drums she brought with her, and is now preparing to return home; the containers strapped to her back with a calfskin sling and rope.

“I used to walk about four hours each way to fetch water. Now it is right on my door step,” she says. “Not only is it close, but it is also clean and healthy.” says Haige happily.

Also at the water point today is 12-year old Budo. He enthusiastically drives the hand pump up and down, forcing water from the depths of the well  and into a jerry can brought by another of today’s visitors to the site. Budo is in the fourth grade at school, and also remembers when he had to walk a great distance for water, lugging a container back and forth for hours. “I don’t have to walk all that way anymore,” he says shyly, happy to be able to concentrate on school and tending his family’s livestock instead.

A few villages away, at another shallow well-constructed by World Vision earlier in the year, Hami (pictured above) is also filling her container. A widow and mother of four, she has walked for an hour to access this clean, safe source; “Before I had to walk for three hours to get water. I had to dig in the sand and wait for it to fill. Then the water used to make me and my children ill. Since I started fetching water from this site I have not been ill, and neither have my children. Our problem of water has been solved.” Hami concludes, hauling the drum onto her back, and setting off up the hill towards her home.

Access to clean, safe water was a critical need in the communities of South Omo, nestled between South Sudan to the west and Kenya to the south.

When drought hit this district, only a fifth of households had access to improved water sources. Now after 18 months of work, nearly half the people of Hamer are using clean, safe wells to meet their water needs.

In addition to constructing some 35 new wells, World Vision has been investing in structures to harvest roof water during the rains, and has restored many damaged and disused wells in the area. In all, some 32,000 people are benefiting from these new services, with new wells currently under construction. Hygiene and sanitation training are also underway, teaching communities how to keep their children healthy.

As the water projects launched in the district in mid-2011, World Vision also began a connected nutrition project. Improved water quality would reduce illness among young children in the area, and would contribute to a long term drop in malnutrition, but emergency programmes were also needed to treat those boys and girls whose health had already begun to suffer.

A short drive from the water point at the village, followed by a hike through the bush, took us to the home of Gelte. A mother of three, we found her weeding her lush farmland, populated by head-height maize and sorghum, dissected by rows of beans.

With this fertile jungle around us, it is hard to believe Gelte and her family were struggling to survive just one year ago. But her farm was left idle when it dried under the harsh drought. “All of us got thin from the shortage of food and water,” she says, recalling the events of 18 months ago. “We were just bones,” says Gelte somberly, as her youngest child clings to her chest, already bored with the visitors that are occupying her mother’s attention.

Gelte and her three children were entered into World Vision’s emergency nutrition programme, which provided immunisations, supplementary feeding, and Plumpy’Nut -- a peanut-based paste with a high nutritional value that supports rapid weight gain in young children. About 4,500 children and nearly 1,500 mothers were supported through the nutrition programme during the worst of the 2011 drought.

The health of Gelte’s children improved; “The drought was very serious, but we survived it with the help we got from the project,” she says. “It is my prayer that such times never come again.”