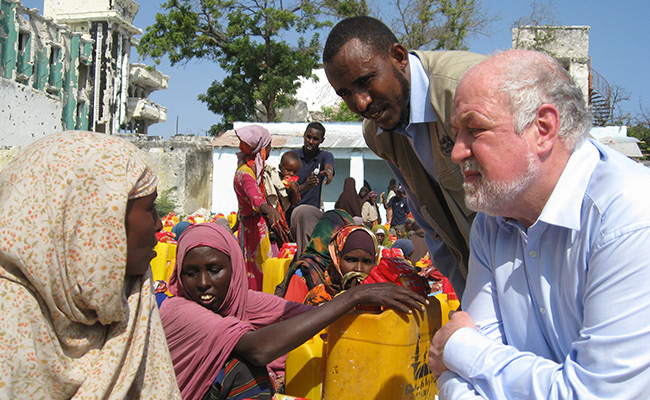 DEC Chairman Clive Jones is visiting East Africa 6 months on from the launch of the DEC East Africa Crisis Appeal. He writes here about his visit to Mogadishu, Somalia to see DEC funded aid work which continues despite the dangers of the current security situation.

We make our way along a main road which has not been maintained for twenty years, then through side roads which more like sand dunes to our home for a few days...The Peace Hotel.

Bizarrely the hotel contrasted its name by sending its own militia armed with AK47s to escort us the 1500 metres or so from the airfield to the compound.

The hotel is packed with aid workers. Islamic Relief, Save the Children and a doctor from Merlin are all here despite the dangers.

The rains have come to north Kenya and Ethiopia and eased the situation there to some degree, but in Somalia four million people are still at serious risk, three million in the South Central region. In this war-torn country, which has not had a viable national government for more than two decades, one in four children never sees their fifth birthday.

Within hours we are at the headquarters of Islamic relief in Mogadishu where an incredibly enthusiastic team, all recruited locally, describe their aid work to provide, food aid, WASH (water, sanitation and hygiene advocacy), health services and education to the most needy both around the city and across the country.

We visit a clinic at a nearby internally displaced people’s (IDP) camp, where next door a charismatic thirteen year old leads a class of youngsters are both learning to read and getting to know hygiene basics.

Then on to a food distribution site where 250 of the neediest households in Mogadishu are gathered to get supplies of rice, sugar, cooking oil and salt. The depot is a haven of peace in a crater of war-torn hell. We are in the former government district which has been bombed and shelled to bits by rival factions.

We are surrounded by shattered buildings and the food is lined up against a massive wall pock-marked by shell holes and small craters in the concrete created by machine gun fire.

A young Somali mum tells me the food distribution will feed her, her husband and their five children for two months. Islamic Relief thought they were proving enough for a household for a month at most.

Back at the hotel the aid workers talk enthusiastically of longer term plans to support peace when it comes. Plans to underpin education develop new industries, long term health and create again the “nation of beautiful people” as Somalia was once known thoughout Africa. And plans to help and advise the Somalia conference to be chaired by Britain in London on February 23rd.

The Peace Hotel could be the start of something significant.