The Daily Telegraph’s front page headline Charity millions 'going to Syrian terror groups' is simply untrue*.  There is no evidence that any funds from the £20m DEC Syria Crisis Appeal have been used to support armed groups in Syria. The Charity Commission has not suggested to the DEC that it has specific concerns regarding the diversion of funds we have raised.  In fact, the DEC worked with the Commission to draft guidelines for charities to help them avoid funds they raise for aid to Syria being misused.

“The DEC and its member agencies go to extraordinary lengths to ensure aid reaches the people for whom it is intended.  Ordinary people driven from their homes by the war in Syria need food, water, health care and shelter - many might not survive without this essential aid.

“DEC members and their partners take all reasonable steps to avoid any theft or losses and in particular to ensure that aid resources are not used to support armed groups.

“We are truly appalled that this story could mislead the British public who have been so generous in supporting our appeal and concerned that it may place the lives of aid workers in Syria at risk.”

Below you can read in full the statement issued by the DEC to the Telegraph on 04.10.13, explaining the lengths that the DEC and its members go to in order to ensure resources are not diverted from their intended purpose, even when we are working under extraordinary challenging circumstances as in Syria.

“The DEC and its 14 member charities have collectively raised £20m since the launch of the DEC Syria Crisis Appeal on 21 March 2013.  Of these funds £9.6m was given to the DEC itself and £10.4m was given directly to our member agencies. In the first three months after the launch of the appeal 129,000 people received DEC-funded aid and over 80% of those helped (108,000) were inside Syria.  The assistance provided inside Syria and in Jordan, Lebanon and Iraq has included food, clean water, emergency shelter, hygiene kits, medical care and household items such as bedding and cooking sets. Read further details.

DEC member agencies are responsible for taking decisions about how they spend DEC-raised funds within agreed rules but are required to report on their expenditure to the DEC which publishes public updates. Member agencies operate in different ways but the primary means they use to ensure that aid is reaching those in need and is not being diverted include:

The DEC and its members are always acutely aware of the risk of aid not reaching the intended beneficiaries due to deception, theft or diversion.  This is particularly true when we are responding to a humanitarian crisis caused by a chaotic conflict such at the one in Syria.  It is never possible to entirely eliminate such risks if you wish to help those in greatest need but DEC members take all reasonable steps to avoid, uncover and minimise such losses.

The DEC and its member agencies do not fund or provide support to political organisations or armed groups.  In places like Syria member agencies will have specific policies and procedures in place, based on decades of operational experience and in compliance with UK legal requirements, to ensure they prevent resources reaching these groups. Member agencies’ reporting to the DEC includes information about any losses or fraud involving DEC funds and we have not received such information regarding any DEC Syria Crisis Appeal funds.”

The Charity Commission has now issued the following statement clarifying their position.

'The Commission has always encouraged the public to give generously to charity, and we continue to do so. Many people in Syria and who have fled Syria are in desperate need and rely on help, including that afforded by the generosity of the British public.

[Charity Commission Chairman] William Shawcross' statement and our recent guidance to charities aim at reminding charity trustees of their duties when working in high risk areas, especially areas in which terrorist groups operate. They are not intended to put people off from giving to established charities.  We want to reassure the public that the established well-known charities working in difficult areas have robust systems in place to ensure their funds reach the intended beneficiaries and is not diverted to fund terror groups.

The Disasters Emergency Committee has worked with us in preparing our guidance to charities working in high risk areas,  precisely because their members have extensive experience of successfully protecting their charities from harm.

"The Daily Telegraph’s suggestion that ‘millions’ are being diverted from well-known charities to fund terror groups is speculative and certainly does not represent what we know. Such allegations risk undermining the efforts made by charities to alleviate the suffering of vulnerable people in areas like Syria. I hope that people will continue giving to charities working in the UK and around the world with their usual generosity. I can reassure donors that known cases of terrorist abuse of charity funds are very low and that we will vigorously pursue any such allegations."

Following a complaint from the DEC the Daily Telegraph have now updated the headline on this story to: Charity cash 'going to Syrian terror groups' .  The story remains grossly misleading.

The Telegraph have today published the following letter to the editor from the Chairman of the Charity Commission,William Shawcross.  The letter points out that the DEC and its member agencies have advised the Commission on the guidance it produced for charities about avoiding the diversion of funds to terrorists.  Mr Shawcross goes on to encourage the public to give to well established charities that are known to be addressing all such risks. 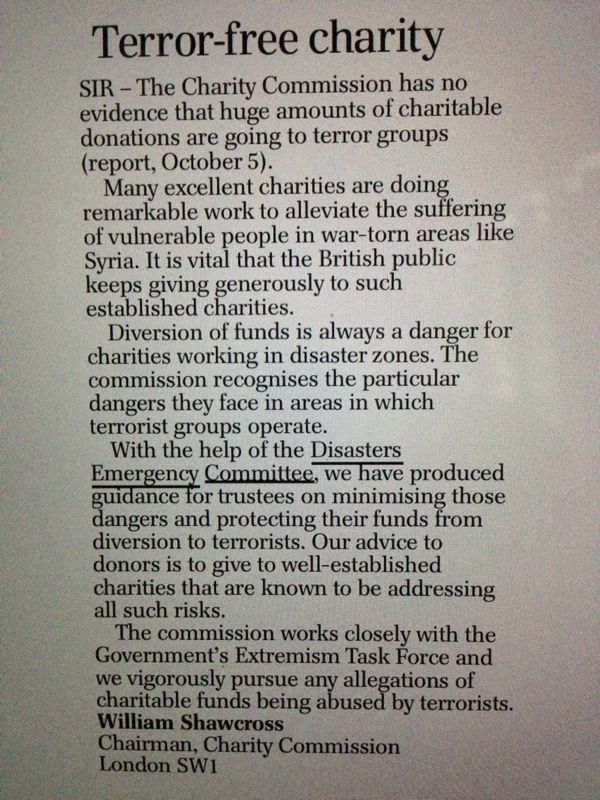 Following a complaint by the DEC to the Press Complaints Commission (PCC) that the Telegraph headline was factually incorrect and the story misleading - in breach of Article 1 of PCC Code - the Telegraph agreed to attach a note to the online version of the story about the two changes they had made and to publish a 'clarification' in the newspaper.  Details of the outcome can be found on the PCC website.