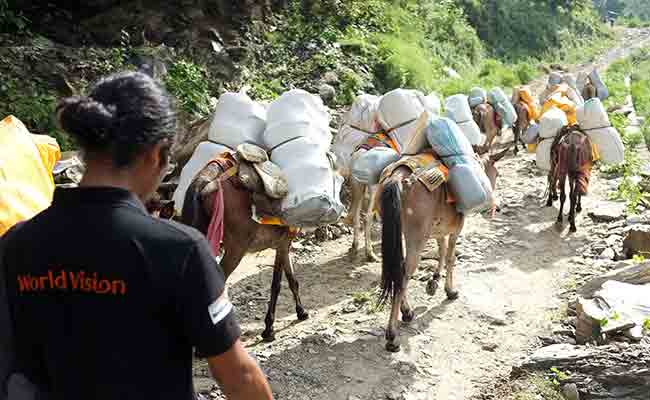 The Disaster Emergency Committee (DEC) Nepal Earthquake Appeal has now raised £83 million. Using these funds and money from other sources, DEC member agencies have worked with international partners, local organisations and affected communities to deliver aid across 14 of the worst-hit districts.

“The generosity of the UK public has helped DEC members to reach more than two million people in the first three months of the response. Our members continue to work at full pace, providing urgent aid to remote villages despite the heavy rains and regular landslides. They will continue to work with Nepalese communities for years to come to help get children back to school, healthcare systems back up and running and homes built, as well as supporting families to boost their income and be better prepared for the next disaster.

“In Nepal this month I met so many dedicated and determined people working together to rebuild Nepal. Almost everyone asked me to pass on their personal thanks to all those who have given to the Nepal Earthquake Appeal.”

On 25 April the worst earthquake to hit Nepal in 80 years destroyed the homes of 2.4 million people. Many families are forced to live in makeshift shelters, which offer meagre protection against the worsening monsoon rains. After a second major earthquake on 12 May and regular aftershocks, some people are still too afraid to return to their homes, living in tents along roadsides or in friends and neighbours’ gardens.

Some people have started to clear debris and rebuild their damaged homes but do not have the tools and information to safely rebuild their homes. People affected say the most crucial help they need now is corrugated iron sheeting so DEC members have been distributing iron sheets for roofing and helping people build better quality temporary homes.

Some agencies have deployed engineers and experts to help people construct shelters and one agency has built a model house to encourage replication. Others are paying people to rebuild their homes, providing a much needed income, as well as shelter, while some agencies are distributing cash so people can buy construction materials locally.

Despite the heavy rains and damage to the health system, a widespread health crisis has been averted. DEC members have distributed hygiene and water kits across the 14 priority districts, built latrines, provided clean drinking water and water purification supplies. With 46 percent of water systems damaged or destroyed, water and sanitation provision is vital.

However in the middle of monsoon season, there is still a risk of waterborne disease, particularly in spontaneous sites and camps where overcrowding and very poor sanitation conditions persist. Responding to an outbreak will be difficult due to the damage or destruction of more than 1,200 health facilities.

The rains have also increased the number of landslides and caused flooding. More than 3,000 landslides were recorded over two months (25 April-1 July) following the quake, making access to affected areas extremely challenging and dangerous. Some areas have been cut off from help while member agencies can only reach other areas by walking for hours. People living in at-risk locations are forced to leave their homes for safer areas or are being formally relocated, putting pressure on the limited services in camps.

Despite the challenges, DEC member highlights include: